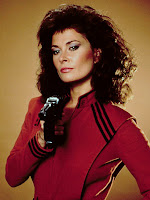 It's a homecoming of sorts.

Televisionary has confirmed reports that Jane Badler, who starred in NBC's 1983 miniseries V (and the subsequent V: The Final Battle and the short-lived 1984-1985 series) and is currently recurring on Aussie soap Neighbours, has been cast in ABC's revival series, which returns for a second season in November.

V showrunner/executive producer Scott Rosenbaum teased crowds at the V panel at San Diego Comic-Con (moderated by yours truly) when he let slip that we would soon be meeting the mother of Visitor high commander Anna (Morena Baccarin) and that Mommy Dearest's name was, um, Diana. (I then asked Rosenbaum point-blank if Badler would be cast and he declined to answer.)

Rosenbaum today confirmed a TV Guide Magazine report that indicated that Badler had been cast in the role.

"I'm very excited," Rosenbaum said to me via email earlier today. "As I said [at] Comic Con, the role would go to the best actor. Jane's audition was great and I'm thrilled to bring her on board."

So there you go: V, Jane Badler, and Diana, together again.

Debbie said…
Can't wait for someone to put Anna in her place! Would love for Lisa to "discover" Grandma with Dr. Josh' help, then have them work together as part of the Fifth Column from within the ship =...

Can't wait to see the "V queen" Baccarin be taken down! Especially if her own family is heavily involved. That type of turning point in her war is not something I expect she would relish...
8/06/2010