Academy of Motion Picture Tedium: Was This the Worst Oscars Ever? 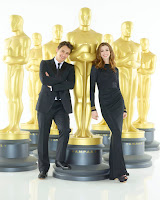 Just a few quick words about last night's experiment in tedium that was the 83rd Annual Academy Awards.

Over the years, the Oscars have gotten the (rightful earned) reputation for being a bloated, boring telecast of an awards show. Overblown and hyperbolic, the Academy Awards have often represented a largely three-hour-plus snoozefest, apart from Billy Crystal's memorable opening monologue/montages and some occasional upsets.

Painfully awkward, unfunny, and sluggish, last night's awards ceremony dragged on for three and a half hours with barely a laugh thrown in. As The King's Speech rather predictably swept through the awards categories (and I say that as someone who was a devotee of the film), the entire affair seemed to be a deflated mess of a show, a bizarre mix of history lesson, stage elements, auto-tuned music videos, and kids singing at exactly the moment everyone wanted to stream out of the cavernous Kodak Theatre auditorium.

When poor Kirk Douglas gets the biggest laughs of the evening as he's uncomfortably trotted up to the podium to announce the Best Supporting Actress winner, it's a sign that something's wrong in Hollywood, and Hathaway and Franco seemed at times to be alternately bored (Franco), overly peppy (Hathaway), or as though they were hosting Saturday Night Live again.

While the two seemed game enough at first, as the evening wore on, their expressions drooped considerably. Jokes about this being a youth-centric Oscars broadcast hit close to home. Elements such as the previously mentioned auto-tune music video, the hackneyed Inception "homage" gambit, etc. all seemed to scream the Academy's intention to make this the most accessible and "fun!" Oscars ever for the young'uns. How wrong they were, as more consideration seemed to be spent on Hathaway's numerous costume changes than in making the telecast, well, funny. Or even remotely entertaining.

Yes, there were some genuinely entertaining moments within the tediousness. I thought that The King's Speech screenwriter David Seidler gets the award for the best speech of the evening. (Colin Firth is the runner-up here.) Melissa Leo, who took home the Oscar for Supporting Actress even after those campaign ads, had the most bizarre acceptance speech of the evening, though her historic F-bomb was perhaps the most unscripted moment of the entire night. (The same can't be said for Best Actress Natalie Portman, who thanked everyone involved with Black Swan, including the camera operators. Sweet? Perhaps, but also a little calculated.)

I had thought that no one was going to get booted offstage before they finished, so why did the director try to cut off--off all people--verbose Aaron Sorkin, who won for Best Adapted Screenplay for The Social Network and the producers of said film, who won Best Picture?!? Yes, the show was running 30 minutes over, but perhaps they would have been better to scrap some of the needless "theme" elements peppered throughout the broadcast, especially as the winners of the Governor's Award were trotted out on stage to wave rather than, you know, actually say anything on-screen.

Me, I'm just lucky that I TiVo'ed the ceremony and started over an hour and a half late, so I could skip through the commercials and over some of the dullness of this boring monstrosity. As for the Academy, they'd do best to rethink just who can pull off hosting duties on Oscars night. I hear Ricky Gervais might be available...

Clinton said…
I'm not sure what the role of the Oscars is on TV. As "entertainment," it must hop back and forth between humor and actual awarding of trophies, making both activities appear to interrupt the other. As an awards show, it does not allow the winner the time they need to thank all the people they want to thank -- because the audience finds that boring. And if you find a host that is acceptable, then the show is all about them and not the Oscars themselves. Truly puzzling.
2/28/2011

Ask Rachel said…
I agree that David Seidler's acceptance speech was one of the few genuine moments of the evening. He was witty, humble, and fairly brief... everything that the rest of the show was not.
2/28/2011

Anonymous said…
I am thinking it is only a matter of time before Ryan Seacrest is moved from the red carpet to the front of the theater as host. He is not my personal choice, but I can see that he might bring the demographic the show is looking for to the telecast. He has experience before a live audience and seems able to move things along.

Again I will say that if they wanted to bring a touch of Glee to the Oscars, they should have used actors from the show as hosts - Jayne Lynch may have really been a clever host, and then the singing elementary school kids at the end might have made sense.

rockauteur said…
It was so boring. I thought Anne Hathaway was ok - she at least tried to sing and dance and such... but Franco bombed big time... and I was waiting for the moment he would show up in drag. He was so stilted and lifeless; as soon as the show began I knew there was a problem when he could barely read off the teleprompter without any charisma.

What's with the quick but dumb flashback montages that are homages to Oscars past? How about reveling in Oscars present? I am tired of all the past tributes to Oscar moments - or did we need to relive the past because the current show wouldn't provide anything for the history books?

Would have rather they gone for a comedy piece on WHO IS BANKSY rather than JT's lame joke taking credit for Banksy or the dumb banter between him and Mila Kunis on the animated background of the set. I could have easily chopped 30 minutes out of the show had I been director.
2/28/2011

Jon88 said…
How Einsteinian. Just before visiting here, I read another TV critic who applauded the show for running "just over three hours." Actual running time to the end of the credits: 3:15, halfway between the two of you. But subjectively, I agree with your 30-minutes-over feeling. Yawn.
2/28/2011

Brent McKee said…
The thing about these Oscars running just over three hours is that it felt like it was a hell of a lto longer than that. And that's important because it marks a failure in the production, the hosts and probably most importantly the writing. There have been Oscar telecasts that have run closer to four hours that felt a lot shorter than this fiasco did.
2/28/2011

Page48 said…
For me, the Oscars only ran 3 minutes.

Charleybrown said…
I agree with your reference to their previous turns hosting Saturday Night Live. I thought that some of the jokes were inappropriate for a worldwide audience of what I thought was supposed to be a classy event? At least if I turn the channel to SNL, I know what I'm getting.
Hathaway was too perky. Franco acted like he didn't want to be there and then neither did I want to be but I hung in to see the statues handed out for The King's Speech!
2/28/2011