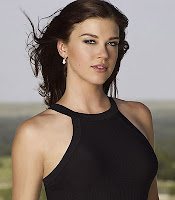 Former Friday Night Lights mainstay Adrianne Palicki, who starred in FOX's short-lived drama Lone Star earlier this season, has been selected to play Diana in David E. Kelley's Wonder Woman pilot for NBC. The project, written by Kelley, will be directed by Jeff Reiner, who previously worked with Palicki on Friday Night Lights.

Putting aside my thoughts on the project itself for a second, I think that Palicki should be a much bigger star than she is. Her performance as Tyra Collette, which she briefly reprised on Season Five of Friday Night Lights was electrifying: a tough-as-nails teen who fell into an unexpected romance on the show with a most unexpected partner (keeping the FNL plot points to a minimum here). And while I wasn't a fan of FOX's Lone Star, Palicki's performance was a standout and it was fantastic to see her in a more mature, adult role.

But Palicki should know what she's gotten herself into: namely that Kelley has a hell of a lot of work to do on the Wonder Woman pilot script, which has been maligned by many in Hollywood, including yours truly. You can read my take on the truly awful pilot script over at The Daily Beast, in a script breakdown (of the eight craziest scenes) that ran a few weeks back.

Unless Kelley rejiggers the script significantly before production, Palicki will play three versions of WW in the pilot episode: superhero Wonder Woman, high-powered business mogul Diana Themyscira, and Diana Prince, mousy assistant to Etta Candy who lives in a tiny West LA apartment with her cat Desi. Yes, this is a Wonder Woman who wants to have it all! Who is still pining for lost love Steve Trevor, now a lawyer in the Justice Department! And who cries herself to sleep at night!

And, no, I'm not kidding about any of this.

New Buffalo MI fishing said…
Wonder Woman already had the means to build that plane since those of her people on that Island had plenty of wealth available to them. In addition to which I'm sure that if she had wanted to she could have found her own gold or diamonds at anytime what with her super powers.
2/17/2011

Craig Ranapia said…
Adrianne Palicki is the only thing about this that doesn't give me hives. She was wonderful in FNL, but I don't think anyone is going to save this unless it ends up being Showgirls-level so-bad-its-kind-of-good.
2/19/2011