Game of Thrones: The Maester's Path 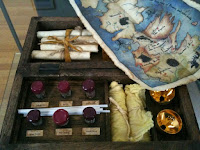 I have traveled to Pentos and the Inn at the Crossroads.

Thanks to HBO (and Campfire)'s new immersive experience The Maester's Path, I've accrued the first link in my maester's chain. If you have no idea what I'm talking about, then you haven't read George R.R. Martin's "A Game of Thrones," the first in the author's multi-volume novel series which is about to hit the airwaves next month as HBO's Game of Thrones.

Last week, I tweeted that I had received an ornate wooden box from HBO containing scrolls, vials of various scents (from incense and pear brandy to wood beams and salt harbor). Following the instructions (lovingly embodied in a series of hand-tied scrolls), I was directed to mix the scents to create two blends, each one embodying two locations within the world of Game of Thrones. Pear brandy, wooden beams, and crusty bread combined to form the heady perfume of the Inn at the Crossroads, while salt harbor, incense, and spice market formed Pentos.

Over at Cultural Learnings, Myles McNutt discusses his thoughts on the transmedia implications of sending out these immersive kits to critics, bloggers, and fansite webmasters, all "opinion leaders" whose experiences here all help to promote the series to their followers. Personally, I find it refreshing to receive a press kit that is thoughtful and which ties into the program on offer, rather than more junk to stuff away in a closet, free swag that's neither in keeping with the tone or tenor of the show it's meant to be promoting nor something you want to keep in your house. (American Idol TV tray, I'm looking at you.)

What HBO has done is create an expanding array of experiences to actively engage the user, transporting him or her to Westeros directly.

Rather than send an stock object, HBO's marketing team has commissioned a series of uniquely authentic experiences, each of which serves to bring the user into the world of Game of Thrones by engaging their various senses. This one, which comprises the first link in the maester's chain is meant to get the user to use their olfactory senses, to engage with the material in a way that goes beyond the normal screener and press notes. Instead, you're invited into the world itself, to participate in the atmosphere, to engage directly and perform proactive tasks: mixing perfumes, reading maps, deciphering clues.

The scent bottles each contained a specific symbol on the "aged" glass bottles. Fansites such as Westeros.org and Winter-Is-Coming.Net spent much of the last few days attempted to decipher clues in their meaning, or unlock hidden messages contained within the maps. Today, HBO unveiled its tie-in website for The Maester's Path, adding a further layer of interface to the user experience. Those symbols unlocked the first link in the maester's chain, as users had to use a rubric to match up the symbols to their scent blends for four locations in the kingdom of Westeros.

The site promises several more experiences yet to arrive, likely tied to each of the four remaining senses (I'm holding out hope for lemoncakes for the "taste" portion) and an opportunity to grab another link in the maester's chain each Monday. I'm curious to see just what turns up over the next few weeks on my doorstep. Will there be Dothraki verses to translate? Weirwood branches to touch? Lemoncakes to eat? (Pretty please?)

While I've been on board with HBO's Game of Thrones since I saw the original pilot last spring, events such as these serve to separate the series from the pack of numerous (and countless) offerings on television. Not because The Maester's Path is an inclusive experience, per se (it's not, unfortunately, due to the cost involved with sending out these custom-designed boxes), but because there's a thought to quality and overall satisfaction here.

This isn't just swag, but an opportunity to extend audience engagement beyond the linear broadcast, to get viewers to ask questions, theorize, discuss, and engage, all with the intention of pushing awareness of the show and its launch in April. It's both canny and informative, and it reduced even this jaded critic to the gleeful curiosity of childhood fascination.

(Meanwhile, you too can join the Maester's Path and play along as well. Click here to begin your own journey to Westeros.)

Chanah said…
Eric, you and I are thinking exactly the same way. I want one of these neat and nifty kits for myself, too!
2/28/2011