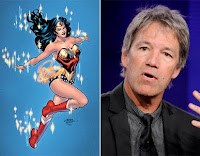 I've been vocal on Twitter about my confusion about why David E. Kelley was given the right to develop DC Comics' 70-year-strong "Wonder Woman" into a pilot script, which was initially passed on and then given an eleventh hour reprieve by NBC, which ordered it to pilot.

Over at The Daily Beast, you can read my latest feature, entitled "8 Crazy Scenes from David E. Kelley's Wonder Woman," in which I sort through Kelley's first draft pilot script to Wonder Woman and choose the most head-scratching, ridiculous, or just plain awful moments therein.

Is this a take on Wonder Woman/Diana that you're excited to see? Or has Kelley gotten the character completely wrong? Head to the comments section to discuss.

Fizzhogg said…
Fantastic breakdown of the script. So nice to see someone not bowing to the legends simply because they're legends. Kelley needs to stop trying to write what was popular a dozen years ago. If he wants to "get with the times" then he should write about a middle-aged white guy who's out of touch with pop culture.

NBC is going to make another huge error by spending millions on something simply because of the name involved, as opposed to quality.
2/03/2011