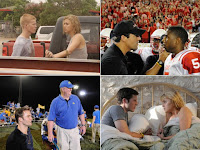 Yes, last night marked the end of Friday Night Lights and television--and perhaps the world--is a little sadder for its loss.

I have two connected features over at The Daily Beast that tie into last night's series finale ("Always") of Friday Night Lights. The first is "Goodbye, Friday Night Lights," a eulogy for the show, in which I examine the series' legacy and talk (briefly) to executive producer Jason Katims and series lead Connie Britton about the show's influence and its passing.

The second is a fan-centric gallery-style feature, in which I talk to Katims and Britton about some of the more nitty-gritty aspects of the show. Just what was the deal with Hastings Ruckle? Why wasn't there a finale scene between Jason Street and Tim Riggins? Do they think the Julie/Derek storyline worked? Does Katims still stand behind Season Two's controversial Tyra/Landry plot? Was it tricky to play with the dynamic of Tami and Eric this season? How important was it to tie up the storylines of the original cast? What's next for Britton? And why does she so fondly remember the scent of bacon in the air?