The Daily Beast: "Why You Must Watch Parenthood" 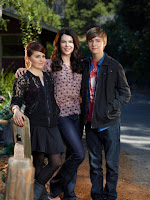 So, wait, you're not watching Parenthood?

NBC’s Parenthood is not the most glamorous show on television. Its focus, charting the lives of a sprawling Berkeley, California family, might pale in comparison to, say, Desperate Housewives’ antics on Wisteria Lane. There are no murders, no swapped babies, and no satirical, over the top look at domesticity here.

Which is to say: enough is enough. This is a show that you should be watching, regardless of whether you're a parent yourself or a teenager. (Or, even if you're well past your teen years.)

Over at The Daily Beast, you can read my latest feature, "Why You Must Watch Parenthood," which discusses the reasons why you have to watch NBC’s criminally underrated drama Parenthood, which captures the highs and lows of family life.

On tonight's episode of Parenthood ("Do Not Sleep With Your Autistic Nephew's Therapist"), Crosby deals with backlash from his mistake; Alex's constant visits irk Adam; Kristina and Adam must confront an issue that could hamper Max's progress.

Jace Lacob said…
I am neither a parent or a teenager; it was a simple shorthand of describing the range of potential viewers. It took my a little while to get into Parenthood initially, but it's been a rewarding viewing experience. I'd recommend giving it another shot if you haven't watched in a while.
2/22/2011

Ally said…
I'm with Jace - neither a parent nor a teenager. It took a while for me, but this show really found its groove and now I find that I really look forward to it each week.
2/22/2011

Thomas said…
I'm with Jace too. Glad to see that like me you've discovered and are enjoying both Parenthood and The Good Wife!

They aren't really the type of shows I'd expect to like on the basis of their premises (I'm more of a West Wing & Veronica Mars, Arrested Development & Extras and Buffy & Angel type of guy to give you some general idea) and I wasn't sold on either immediately, but now I consider them some of the best network drama series out their, and I'm really glad I tried them out for their stellar casts.
2/22/2011

Diane said…
God, I love Parenthood. I came to it because I'm a Lauren Graham fan, and she is great, but it's Monica Potter and Peter Krause who keep me coming back for more. Plus Mae Whitman is fabulous, and Dax Shepard is superb, and I really like Erika Christensen... it's one of the best casts I've ever seen, in fact. It is kinda quiet and unshowy, but it's well-written and real, giving stories time to grow and us time to know the characters instead of being sensationalist. It's a real shame it isn't more popular.
2/24/2011

M3Mark said…
Most of the actors are very good, and it's nice to see they're being recognized. Howver, we tried this show for most of season 1. There were too many characters doing too many stupid things. Wanted to shout "grow the frak up" more than a few times. There really wasn't anyone to identify with, to really hook us into the show. But, we tried...
2/27/2011