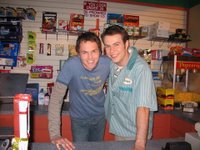 The boys over at Nobody's Watching have added several new videos in the last few days, including a hilarious (if way too short) spoof of my favorite treadmill-based video ever (that would be "Here It Goes Again" by OK Go) and a video showing Derek and Will playing a game of 24... because, let's be serious, all of us twenty-something guys secretly wish we were Jack Bauer.

They've also given you, their loyal fans, the opportunity to tell NBC what you really, really want: "We’re going to pay NBC a little visit with our cameras in the next couple days and make sure we let them know what we think about their new fall schedule. And if you guys have anything you’d like to tell them about any of their shows (good or bad), post it here or call us at 818-620-3151 and we’ll be sure to tell them for you."

Start your emailing and phone calls now (though Derek's voicemail box already appears to be full) complaining about the never-ending airings of Deal or No Deal, the truncating and shunting of Kidnapped to Saturdays, and why you think Dawn Tinsley, a.k.a. The Office's Lucy Davis (currently appearing on Studio 60 on the Sunset Strip), deserves her own series. Because, well, she does.

And Will & Derek, as long as you're over at the Peacock offices, can you be sure to tell NBC that we want lots more of the US version of The Office for many years to come? OK, thanks.

rockauteur said…
I love Nobody's Watching! These guys are pretty funny. I wonder - if NBC officially does give it the go ahead - if they will transition the boys from the WB (where the first pilot took place) to NBC. I presume so, which we can only count then for lots of inside jokes about how poorly (save for Heroes) the network is doing.
10/11/2006

Caro said…
The song in the OK Go video is "Here it Goes Again," just so you know! :)

Ouch. I do not know what I was thinking! But the song title has been fixed--thanks for the catch and the kind words!
10/12/2006