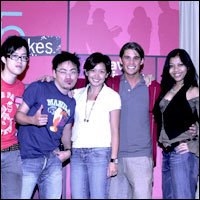 The Travel Channel has unveiled the cast for the upcoming third installment of globe-trotting adventure series 5 Takes. This time, the cable network has reversed their format a little bit and instead of sending American travel journalists overseas, they've decided to send five travel journalists from the Pacific Rim to the United States.

While I love 5 Takes (and was wildly addicted to the last installment, 5 Takes: Pacific Rim), I have to ask myself if the show's producers watched the snoozefest that was The Amazing Race: Family Edition, which for the most part remained firmly planted within the US of A. While I understand that the show is watched around the world, what excited me most about the series was the interplay between the journalists as they visited exotic locales in Australia, Thailand, New Zealand, and Hong Kong. I just can't get as excited about seeing the TJs explore, say, Austin, Texas. It's too familiar, I think. I watch the Travel Channel for escapism and to learn about new places, rather than tune in for programs about the US. Does anyone else feel the same way?

And those are some random cities... Orlando? I'd rather have seen them visit post-Katrina New Orleans or Boston or Portland... or Seattle. Still, I'll be tuning in to catch these latest travel journalists in action, even though I am already missing Gabe, Tony, Tiffany, Renee, and Josh. It just won't be the same without them.

The third season of 5 Takes kicks off on the Travel Channel on October 28th.

Anonymous said…
So far I am not impressed with it (just from the looks of their blogs and vlogs). But I'll reserve final judgement until I've watched the Las Vegas and Anchorage episodes.
10/23/2006

this is tj tim from 5 takes usa
sorry to hear that you were not into to our blogs and vlogs...
what sort of stuff do you want to hear about about?

let me know on my string on our us website. be cool to hear from you!!

we are all in alaska atm

look forward to your own blogs!!!!

El Hombre said…
watched it for the first time tonight...it's a neat concept. for an american who hasn't traveled much domestically, it's a great program. plus, Jaime is 'quite dishy'.
11/18/2006

Anonymous said…
You're not the only one who's missing Gabe, Tony, Tiffany, Renee and Josh. And after watching several episodes of 5 Takes USA, I'm missing last season's TJs even more.

The first problem is the location. I've trekked all over the US and could probably make my own travel show about the country. Enough about the US, I want to see other countries.

The second problem with the show is the TJs. I really only like one or two of them. One is so high on himself it's completely laughable. My girlfriend and her sister have gone from thinking he's hot to laughing at his words and actions. (They read the 5 Takes message boards.)

Anonymous said…
Good morning Very interesting website you have here. It has been very helpful Thankyou.
11/27/2006