Who is the New "Doctor Who"? 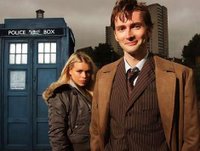 Let me start out by saying that growing up I was never a huge fan of the original decades-spanning run of Doctor Who, that bizarro sci fi drama about a time traveler known only as the Doctor, a member of the alien race the Time Lords. Sure I'd seen a few episodes here and there and had a certain fondness for the Tom Baker incarnation with his floppy scarf and mess of curls, but I never connected with the show in any meaningful way. If that's hurt my geek cred, so be it.

It wasn't until BBC launched a new series of Doctor Who (and it migrated to the States on cabler Sci Fi) that I began to understand the appeal. This is ultimately a series in which anything can happen, from alien encounters to ghosts to time travel to the exploration of humanity's undoing. It also never takes itself too seriously, which is jolly good fun as sci fi series are often undone by their own attempts to become Serious Drama. If you've got it, why not flaunt it and revel in it?

When Doctor Who was relaunched, it starred Serious Actor Christopher Eccleston as the Doctor and former singer Billie Piper as his traveling companion Rose Tyler. I absolutely loved the two of them together and they seemed to perfectly balance one another: Eccleston's Doctor was cerebral with a darkly sarcastic side, while Piper's Rose was physical, street-level fun. (She was, after all, a shopgirl he rescued from a mass of murderous living mannequins.)

But nothing lasts forever and Eccleston departed the series at the end of Season One in that tried-and-tested backdoor that the series built in long ago: regeneration. Using this deus ex machina, the Doctor can physically regenerate himself into another form, rather like the metamorphosis of a caterpillar into a butterfly, making it possible for an infinite number of actors to assume the mantle of the Doctor. Enter David Tennant, who wowed me with his dynamo performance in BBC's musical/mystery series Blackpool (or Viva Blackpool as it was called on BBC America), where he played a lovestruck police detective. I had loved Eccleston's take on the character and, while I fan of Tennant's, I was wary about someone else inhabiting the good Doctor's duster. Tennant has a certain intensity that made me wonder if he'd click with Billie Piper, but any doubts I had evaporated when I saw Tennant introduced as the latest incarnation of the Doctor.

Fortunately, Tennant is more than capable of making the role his very own, granting the Doctor a madcap energy and zeal that was missing from Eccleston's performance. His Doctor is more youthful, more quirky, and giving to wearing tweed suits with whiter-than-white trainers. (Plus, you've got to love those glasses.) Last week's Doctor Who Christmas Special ("Christmas Invasion") introduced Tennant to the series and I was glad to see that the Doctor's companions, including Rose, her mum Jackie (Camille Coduri), and ex-boyfriend Mickey (Noel Clarke) weren't accepting of this new incarnation off the bat. I was also glad to see Tennant take a backseat in the Special, allowing Rose and the others some time to process the change that had occurred while also, you know, fending off an alien invasion.

In the second season's putative opener, "New Earth," the Doctor is back to being his old self and he and Rose travel to the world of New Earth, a colony of humans inhabiting a new Earth-like planet after ours gets crisped up when the sun explodes. It's there that we get to see this new duo in action and the episode tests both Tennant and Piper as actors. I absolutely loved Rose possessed by the spirit of the last human, Cassandra (Zoe Wanamaker), a returnee from Season One. Tennant is everything I could have hoped for in the Doctor: smart, offbeat, and alternately arrogant and uncomfortable in his own skin. It's not many people that could make a sonic screwdriver an intriguing weapon and Tennant wears it well.

There are definitely some similiarities in Eccleston's and Tennant's versions of the Doctor, but Tennant's Doctor is more outgoing and obviously quirky. Plus, I love how completely flirtatious he is with Rose; the sexual chemisty between them is palpable. And if you're hurtling through time and space in a spaceship that looks like an old British callbox (but happens to be much bigger on the inside), isn't that what gets you through the long and sometimes infinite night?

Ultimately, Tennant's Doctor is in and I wouldn't have it any other way.

On tonight's episode ("That's What You Get, Folks, For Makin' Whoopee"), written by Rebecca Rand Kirshner, Lorelai transforms the house into an Asian-themed getaway in order to cheer up Rory after she and Logan cancel their trip to Asia. As long as Mickey Rooney isn't there doing a completely offensive impersonation of an Asian person, I'm there.

Finally, the season premiere of one of my favorite dramas, Veronica Mars. On tonight's episode ("Welcome Wagon"), Veronica, Mac, Logan, and Wallace head off to Hearst College, where Veronica must solve the mystery surrounding the disappearance of Wallace's new roommate's belongings. No rest for the weary, apparently...

It's the season finale of Sci Fi's whimsical new sci-fi drama that's more Northern Exposure than Stargate. On tonight's episode ("Once in a Lifetime"), Stark tries to take a sample from the artifact int he sub-basements of Global Dynamics, causing the story to shift forward in time to the year 2010. So how much has changed? And what exactly caused this, um, quantum leap? Tune in tonight to find out.

On the premiere episode ("Bold Street: The Accident") of Jimmy McGovern's new drama The Street, a woman's lover and child are involved in a car accident. But honestly, with a cast this good, it doesn't even matter what the episode description is. Just tune in and watch it.

On the crime drama's third episode ("Three"), Bobby and the gang steal an armored car that just happens to be empty, causing the authorities to question their intelligence.

Danielle C.F. Maris said…
Great "Doctor Who" post. I was actually a fan of the old series (I remember watching it with my dad when I was a kid) but I think they've done wonders with the new version. I didn't think anyone could top Eccleston as the "Doctor" but David Tennant won me over in a heartbeat. I agree that both he and Billie Piper were fantastic in "New Earth." And the tweed suits are top notch.
10/03/2006