The "Office" Coup Fails to Amuse 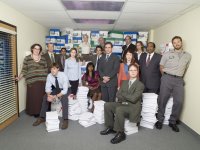 It's sad sometimes when a consistently funny and fantastically written series has an episode that just falls... flat. In this case, it's not a sign of the apocalypse or cause for concern, but rather a blip of disappointment among the hilarity of the rest of the season.

Such was the case with last night's episode of The Office ("The Coup"), written by Paul Lieberstein, who also plays the show's HR drone Toby. Coming off of two hilarious episodes -- "Gay Witch Hunt" and "The Convention" -- I had high hopes for last night's installment and even curtailed my evening out around 11 pm so I could race home and watch The Office before turning in. Sadly, after watching the episode, I wish I had just stayed out and had another drink instead. The Office is never bad and still light years better than, say, According to Jim, but "The Coup" represented quite possibly one of my least favorite episodes of The Office to date.

One of the major reasons for this disconnect was the fact that I just could not accept that Dwight (Rainn Wilson) would go behind Michael's back and arrange a "coup" with Jan (Melora Hardin), even at the urging of secret girlfriend Angela (Angela Kinsey). And their rendezvous was just plain weird... and not funny weird or even amusing weird. Just weird. Like, creepy weird. The way Dwight kept revealing that he knew that Jan loved to shop at Liz Claiborne or that she liked Ann Taylor earrings just didn't ring true to me at all. Plus, the scene in the coffee shop between Dwight and Jan was awkward... and didn't go anywhere.

Plus, if you're going to use the film Varsity Blues in this type of context, how could you fail to use the best/worst line in the entire flick? Namely, James van der Beek's stunningly OTT delivery of the line, "Ah don't want... yuir life." A egregious error on Paul Liberstein's part, in my opinion.

The deleted scenes, available at NBC.com, add a little more depth to what was essentially a really lackluster episode, detailing what happens after Jan walks out of Michael's office, an attempt on Michael's part to restart Movie Monday, a scene between Michael and Pam (Jenna Fischer) in which he synopsizes an episode of Grey's Anatomy, the reveal that uber-creepy employee Creed (Creed Bratton) lives at the Dunder-Mifflin offices four nights a week, and another short scene with Jim (John Krasinski) and Karen (Rashida Jones) at the Stamford branch which resolves the "Call of Duty" subplot... which wasn't really all that funny to begin with. (It's an inside joke on the set of The Office, however.)

The one bright spot of "The Coup" -- and the only chuckle afforded me during the episode -- came when Kelly (Mindy Kaling) insisted that Pam try on her new clothes, ordered online, for a lunchtime fashion show with the chant of "fashion show, fashion show." But then again, I can't get enough of Dunderball-inventor and chatterbox Kelly Kapoor.

Still, I'd take a dull episode of The Office over even the best episodes of some of the other comedies currently on the air. But I hope for a little more from my favorite TV comedy, which I have to hold to higher standards because of the usual brilliance and wit from its cast and crew. Fortunately, they'll get 22 more attempts to make it up to me and next week's episode (by Jen Celotta) looks to be a doozy.

Next week on The Office ("Grief Counselling"): following the death of his former regional manager, Michael forces the staff of Dunder-Mifflin to attend grief counseling, Michael Scott-style.

The Office
Labels: The Office

Anonymous said…
"The Office" is one of my favorite comedies but I was also let down by last night's episode. It just felt awkward and clunky. And I agree that Dwight would not go behind Michael's back like that. Aside from Kelly's snappy banter the episode was dull, dull, dull. I really loved "Gay Witch Hunt" and "The Convention" so, hopefully, this one was just a fluke!
10/06/2006

Me said…
Thats a shame!

Anonymous said…
I disagree. I thought the Coup was hysterical. And I loved the Stamford parts.
10/10/2006

Anonymous said…
I am SO glad to read this. I am in total agreement. Really weak ep. Like you said, even a weak ep is better than most other shows eps, but still....really hard to buy any of it. It's like someone who'd never seen the show was trying to write Dwight, which is very surprising knowing Paul L.

Anonymous said…
Totally disagree...the coup was one of the best eps this season!

And why wouldn't you try to overthrow Michael, hes a freaking idiot. Paul Lieberstein did a great job writing this ep.

Grief Counselling was the WEAK ep.
Seriously someone getting de-capitated? Unrealistic, contrived, unrelatable.
12/17/2006

Anonymous said…
This episode contains my favorite Creed lines of all time: