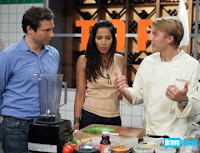 As much as I love my culinary competition series, I have to say that last night's episode of Top Chef ("Today Show") was utterly boring.

One major problem: the episode seemed to focus more on the television presentation (even though none of them actually appeared on camera at the Today Show) rather than the actual, you know, cooking. Which is sort of an issue when you're meant to be making the best damn culinary competition series on the planet. Instead of opting to show the audience what all of the chefs actually made during the Quickfire or Elimination Challenges, the action instead spend much more time on the two-and-a-half minute demo the cheftestants were supposed to accomplish with ease and grace whilst also preparing a delicious dish. Sadly, most of the chefs failed on both counts.

They also failed, once again, to understand the notion of an amuse bouche. While some of them managed to actually prepare a one-bite dish, most of them didn't and some went so far as to create wildly elaborate dishes (ahem, Jeff) or those that required the use of forks and knives. I'm not sure why the concept befuddled many of them but this isn't the first time in the history of the series that contestants have found themselves preparing non-amuse bouche amuses bouches. If that makes sense.

Leah was really one of the select few who actually did follow instructions and create a true amuse bouche and her dish--a fried quail egg with tomato, cheese, and sage--looked absolutely perfect and functioned as an actual amuse bouche to boot. Guest judge Rocco DiSpirito (whose participation was, gladly, limited to just the Quickfire) also loved Jamie's rendition of a familiar breakfast classic with her baby BLT breakfast sandwich with egg and balsamic reduction. A little unwieldy for an amuse bouche (it was more like two bites) but still delicious. And Ariane once again managed to shine, this time with a bacon and cheese-stuffed French toast that looked delicious. Could there be life left in this chef? Hmmm... (Meanwhile, Danny's corn flake-crusted zucchini blossom looked absolutely vile.)

The Elimination Challenge had the chefs preparing a dish that they could then demo in under two-and-a-half minutes on live television. No easy feat, that. As soon as Alex said that he intended to make a creme brulee, I knew that he would be out of this competition by the end of the episode. One doesn't need to be a contestant on Top Chef to know that creme brulee takes quite a long time to make as you need to create the custard, bake it in a bain-marie, allow it to set and cool, and then brulee it with a torch. Is it possible to do in under an hour? Hell no. And Alex was a fool to try something he'd never done before "on live TV" and attempt to do dessert, which ALWAYS trips the cheftestants up at the best of times.

As for the others, it was a mixed bag really. We didn't really get much of a sense of any of their dishes other than the bottom three. Jamie's egg white failed to set in time and she ended up serving nearly raw egg in her bitter green duck egg and caviar salad (which, sadly, sounded fantastic), Melissa burnt the hell out of everyone's mouths with her habanero shrimp, and Alex's creme brulee wasn't even a finished dish. (It failed to set.)

As for the top three, Ariane won with her simple salad of beefsteak tomatoes, watermelon, feta, and fleur du sel. It was deceptively simple yet full of flavor, easy to prepare and demo on live television, and would definitely have audience members at home attempting to make it as well. Jeff's dish of malfouf rolls seemed overly complicated and Kathie Lee went so far as to spit it out (ouch) while the Today Show judges seemed to like Fabio's sesame-crusted tuna but not as much as Ariane's dish.

Wondering what Eugene prepared this week, as he got nearly no camera time whatsoever other than the shots of him cutting his own fish behind the counter at Whole Foods and defining sashimi? He made a pork sausage and bacon sandwich in the Quickfire Challenge and prepared a sashimi of tuna with a snow pea salad for the Elimination Challenge. I'm not sure why the producers aren't focusing on Eugene at all but I still like him and am hoping that he and Jamie go far in the competition.

And how much did you love the fact that the judges commented on Carla's "nervous energy" during her demo? Classic.

Next week on Top Chef ("Gail's Bridal Shower"), the chefs are tasked with preparing the meal at the bridal shower for judge Gail Simmons.

Danielle C.F. Maris said…
Sadly, this was a pretty lame Top Chef. The entire first part of the show seemed to be focused on Fabio while other contestants (like Eugene) were entirely out of the picture.

I was glad that Alex got eliminated, though. His decision to make creme brulee was just silly and I was not surprised that it ended in disaster. Choosing to make something challenging means nothing if you can't execute it properly. Did he not remember the ostrich egg incident?
12/04/2008