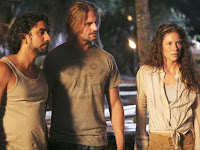 ABC yesterday announced the premiere date for the sixth and final season of Lost, which will return to the lineup on Tuesday, February 2nd with a two-hour premiere (preceded by a one-hour clip show) before setting into its new timeslot of Tuesdays at 9 pm ET/PT the following week. (Televisionary)

Lest they be outdone, NBC yesterday announced the premiere date for Season Three of the much-missed action comedy Chuck, which will kick off its third season with a three-hour two-night event on Sunday, January 10th. The following night, Chuck moves into its regular timeslot of Mondays at 8 pm ET/PT. Sadly, Julia Ling's Anna won't be back for Season Three, a fact that Warner Bros. Television confirmed to me yesterday afternoon. (Televisionary)

NBC has unexpected ordered three additional episodes of struggling freshman drama Trauma. After the holiday hiatus, that will leave the Peacock with six unaired episodes of Trauma. No announcement has been made about just where or when NBC will slot these installments. (E! Online's Watch with Kristin, Deadline Hollywood Daily)

Don't hold your breath waiting for the next Aaron Sorkin series. Following a report by TV Guide Magazine that the West Wing creator was working on developing a series set behind the scenes of (yet another) television series. Entertainment Weekly's Hollywood Insider instead says those statements were rather premature. Or as Sorkin's rep put it bluntly, "There is nothing to discuss at this point." (Entertainment Weekly's Hollywood Insider)

Garth Ancier will step down from his position as president of BBC Worldwide America in March after serving in the role for three years. Ancier, who made the decision voluntarily, will stay on at the company as a "nonexecutive director" as well as hold onto his seat on the board of BBC Worldwide America. No word on his replacement as of yet though possible contenders include Jane Tranter. "We have achieved a great deal over the past three years, but now feels the right time to transition to a new role where I can really help BBC Worldwide shape its strategy," said Ancier. (Hollywood Reporter)

VH1 has ordered a second season of reality competition series Scream Queens, from Lionsgate Television. The winner of the second season, set to air in 2010, will land a role in the studio's next Saw film. (Variety)

Sam Shepard (Brothers) has been cast in Epix Nashville drama pilot Tough Trade, from Lionsgate Television and executive producer/showrunner Jenji Kohan (Weeds) and creator Chris Offutt. Shepard will play the patriarch of a Nashville music family "whose penchant for drink, debauchery and divorce has left them morally corrupt and on the verge of bankruptcy." (Hollywood Reporter)

UK viewers will have the opportunity to watch freshman drama Trauma and another chance to catch Syfy's Warehouse 13 (it aired in its first window on Sci-Fi UK), following a deal between NBC Universal International Television and satellite channel Virgin1. Both will launch next year. (Broadcast)

Circle of Confusion has signed a first-look deal with 20th Century Fox Television. Production/management company already has several projects in development, including an adaptation of Brian Michael Bendis' Powers at FX (with Sony Pictures Television attached), The Descendants at FOX from writer Ed Brubaker, which is described a "new twist on a cop show," and Robert Kirkman's The Walking Dead at AMC. (Variety)

Alicia Witt, Markie Post, and Frances Fisher have been cast in Hallmark Channel telepic Backyard Wedding. Pic is written by Nina Weinman and will be directed by Bradford May. (Hollywood Reporter)