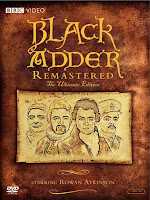 Just a few quick words on two Britcom TV on DVD releases today that brought a smile to this jaded writer's face.

BBC Video today releases new editions of British comedy classics Blackadder and Fawlty Towers, both in deluxe remastered versions that not only include all episodes produced but a healthy dose of extras and bonus features. (Just don't mention the war.)

It's a testament to the creative forces behind both Black Adder and Fawlty Towers that both series have stood up extremely well, even after all of these years; both series remain as sharp, incisive, and hilarious as they were when they aired.

The sumptuous six-disc Black Adder Remastered: The Ultimate Edition contains all four seasons of BBC's Black Adder as well as Blackadder's Christmas Carol, Blackadder's The Cavalier Years, Blackadder: Back and Forth, new commentaries, documentaries (including the 25th anniversary doc "Blackadder Rides Again"), behind-the-scenes featurettes, video diaries, and much more. It's a treasure trove of Blackadder-related goodies that not only celebrates the original comedy series but its enduring legacy.

Likewise, there's a hell of a lot of love put into Fawlty Towers: The Complete Collection Remastered, which contains all twelve episodes of the entire series run (all masterful gems, each and every one), new commentary from John Cleese, extended 2009 interviews (and an exclusive interview with Connie Booth), interviews, commentary, outtakes, and a documentary about Torquay. It's the perfect 30th anniversary present for Fawlty Towers and just looking at the box set artwork (which features the cast) makes me wistfully nostalgic...


Black Adder Remastered: The Ultimate Edition retails for $79.98. Fawlty Towers: The Complete Collection Remastered is available at a suggested retail price of $49.98.

Veronica said…
I used to watch both of these shows as a kid with my dad. I love re-watching them now as they really are timeless comedies. They make me nostalgic but they still also make me laugh!
11/10/2009

Savvy Veteran said…
I'm a little frustrated by this, as I seriously just bought the previous boxed set-versions of both Fawlty Towers and Black Adder for last Christmas. Oh well. I'll live without the new extra features, I guess. Hmph.
11/10/2009