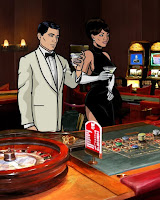 "Danger zone!" FX has ordered a second season of its animated action-comedy Archer, from creators Adam Reed and Matthew Thompson. The cabler has commissioned 13 episodes for the series' second season, which is set to launch next year. The order is up from the seven installments that comprised Season One of Archer. [Editor: while Archer started off rocky and is somewhat hit-or-miss, I'm actually quite enjoying its off-kilter madcap action now that the season is set to wrap in a few weeks' time.] (Variety)

The Los Angeles Times' Maria Elena Fernandez talks to Lost showrunners Damon Lindelof and Carlton Cuse about their partnership on the show. And thanks to a video interview, you can get the words from Team Darlton themselves as they recount the events back in 2004 that lead to the duo forming one of Hollywood's strongest creative partnerships. (Los Angeles Times' Show Tracker)

SPOILER! Meanwhile, TV Guide Magazine's Will Keck has an interview with Lost's Hiroyuki Sanada, who plays the mysterious temple master Dogen on the ABC drama series' final season. Look for the March 2nd episode to reveal more about Dogen's past. "I believe Dogen and Sayid will experience some kind of friendship in the end," Hiro told Keck. "Temples are built for peace and saving people." Hmmm... (TV Guide Magazine)

No, it's not a joke: former According to Jim star Jim Belushi has landed one of the lead roles in CBS legal drama pilot The Defenders, from writers/executive producers Niels Mueller and Kevin Kennedy and director David Guggenheim. Belushi will play Nick, described as "as Las Vegas attorney with marital and drinking issues." (Variety)

Entertainment Weekly's Michael Ausiello is reporting that the cast of FOX's Glee will perform at the White House Easter Egg Roll on April 5th, after being invited by First Lady Michelle Obama. "Rumor has it Mrs. O and her daughters are big fans of the show," writes Ausiello. "And since a White House gig is an offer that’s pretty darn hard to refuse, Glee’s producers did some lickety-split schedule rejiggering in order to honor the request." (Entertainment Weekly's Ausiello Files)

Lionsgate Television has signed a new two-year overall deal with Weeds creator Jenji Kohan that will keep her at the helm of Showtime's Weeds for a sixth season as well as develop other projects. First up is an untitled musical comedy for Showtime that Kohan is writing with Stephen Falk. "Having gotten to second base with Lionsgate in my former 'under the shirt but over the bra' deal," said Kohan, "it's a thrill to now be in bed with them and going all the way." (Kohan is also executive producing the studio's Epix drama pilot Tough Trade.) (Variety)

Entertainment Weekly's Michael Ausiello has a first look at Cynthia Watros' upcoming arc on FOX's House, where she will play the first ex-wife of Robert Sean Leonard's Wilson beginning April 19th. "There can be great comfort in the past," Leonard told Ausiello. "He wants his blankie. And there’s the extra benefit of familiarity and, in a way, a lack of drama." (Entertainment Weekly's Ausiello Files)

Comedy Central has ordered six episodes of an untitled comedy showcase, from executive producers Russell Simmons and Stan Lathan, which will air this summer and will be hosted by Curb Your Enthusiasm's JB Smoove. (Variety)

Bristol Palin, eldest daughter of former Alaskan Governor Sarah Palin, is set to play herself on an upcoming episode of ABC Family’s The Secret Life of the American Teenager that will air this summer. "Bristol Palin is the most famous teenage mother in America," said executive producer Brenda Hampton in a statement. "We're thrilled to have her join us, and I think she will bring additional attention to the issues facing teen parents that we've been exploring for a couple of seasons now." (via press release)

Cabler TLC has ordered a third season of docuseries The Little Couple, with 20 episodes set to launch in June. (via press release)

MTV has promoted Chris Linn to executive VP of MTV Production, where he will continue to oversee development and production of telepics as well as physical production and planning for pilots and series. Linn will be based in New York and will report to MTV programming chief Tony DiSanto. (The Wrap's TVMoJoe)