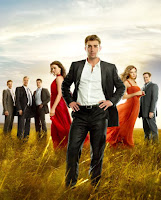 It's official: the axe has fallen on FOX's low-rated con-man drama Lone Star after just two episodes. The initial outing for the James Wolk-led ensemble drama lured only 4 million viewers or so and the second episode saw its fortunes decline further still, with only 3.2 million tuning in. Entertainment Weekly's Michael Ausiello is reporting that production on the 20th Cenutyr Fox Television-produced drama will shut down immediately. “We will have shot five completed episodes after the pilot,” a studio spokesperson told Ausiello, “and will not complete principal photography on episode 106.” No word on the fate of the four unaired episodes that have already been shot. (Entertainment Weekly's Ausiello Files)

[Editor: As one unnamed network insider told Variety's Michael Schneider: "The viewers have spoken." Meanwhile, AOL Television's Maureen Ryan explores her take on what the cancellation of Lone Star means for the broadcast networks, which can be read here.]

FOX meanwhile has announced its timeslot replacement for Lone Star, moving the third season of Lie to Me--which wasn't expected to return to the lineup until November--to Mondays at 9 pm ET/PT beginning next week, while Human Target, slated to air on Fridays, will now move to Wednesdays at 8 pm, where it will fill in the gap left by Lie to Me's shift to Monday beginning November 17th... though it was meant to debut this Friday. FOX will fill that timeslot with repeats of House. Whew. (via press release)

Deadline's Nellie Andreeva is reporting that NBC has ordered a pilot for the as-yet-unwritten supernatural romantic comedy Ghost Angeles, from executive producer Josh Schwartz (Chuck) and star Rachel Bilson (The O.C.). Project, from Warner Bros. Television, will also be executive produced by Henry Alonso Myers, Stephanie Savage, and Leonard Goldstein. "Schwartz and Henry Alonso Myers (Ugly Betty) co-created Ghost Angeles and will write it together," writes Andreeva. "Details on the project are being kept under wraps but, according to a concept circulated around, it centers on a young woman in Los Angeles who can talk to the dead, helping the spirits as much as they are helping her." (Deadline)

The Hollywood Reporter's Matthew Belloni is reporting that three of the stars of Discovery's Deadliest Catch--Capts. Johnathan and Andy Hillstrand (who were sued by the network for not appearing for work on a spinoff) and Capt. Sig Hansen--have quit the production. "We have been through a lot over the past year and unfortunately given the current situation with Discovery we are unable to continue participating in Deadliest Catch," said the fisherman in a joint statement. "It has been a fantastic ride, and we wish the best to all of the amazing and supportive 'Catch' fans we have met over the years." (Hollywood Reporter's THR, Esq.)

Catherine Dent (The Shield) will join the cast of CBS' NCIS for a two episode arc, according to Entertainment Weekly's Michael Ausiello. She'll play Whitney Sharp, described as "a former NCIS agent who shares a past with Ducky" (David McCallum) who is "educated, bright, and extremely capable federal agent who had an eye for talent and a tongue for persuasion back in the day." Her episodes are slated to air in November. (Entertainment Weekly's Ausiello Files)

Lifetime has ordered eight episodes of a US adaptation of British reality format The Fairy Jobmother, which will launch October 28th. (Variety)

Steve Manser said…
Hey Jace, I wonder if you or anyone else could briefly answer me this... what do you believe would constitute a 'decent' viewing figure in millions for FOX to deem a show worth keeping?

It's just figures like 3m and 4m for Lone Star sound awesome for some channels (and certainly British home grown shows) so I was curious as to the average success line, albeit one that varies according to demographic and ad potential, etc.

It would have to be significantly higher than that. Its timeslot lead-in, House, does around 10 million or so if memory serves. The fact that 7 million or so people changed the channel after House ended is disastrous. 3.2 million overall viewers on any US broadcast network (as opposed to cable) is cause for immediate termination.
9/30/2010