Crossroads: An Advance Review of Season Two of The Good Wife 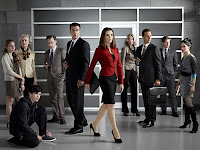 Over the course of its first season, CBS' legal drama The Good Wife transformed itself from a legal procedural into a strong ensemble drama. Which isn't to say that it jettisoned the cases of the week, because, in the hands of skilled creators Robert and Michelle King, it managed to both deepen the characters without sacrificing the courtroom hook, pulling off the rare legal-focused series that actually manages to make us care about the the accused, the defense counsel, and the kids at home.

Inspired by the slew of sexually-charged political scandals, The Good Wife's first season also held up a mirror to our own society, giving us a female lead in Julianna Margulies' Alicia Florick who was determined, harried, and often second-guessing her own decision to stand by her man. In the process, the series posed questions about the choices we make, the value of honesty and fidelity (both in the bedroom and in the state's attorney's office), the plight of the working woman attempting to raise her kids and provide for them with her husband out of the picture.

Of course, Alicia's scandalized husband Peter (Chris Noth) wasn't entirely out of the picture, as the action tracked both the conspiracy that ensnared this crusading state's attorney, his own admitted shortcomings and failures, and his efforts to be released from prison and head back on a campaign to win back both the wife and state that he had lost.

But Alicia is also no meek politician's wife. As proven in the first season, she's a legal dynamo who gives her all to win her clients' cases, even when she doesn't necessarily believe in their innocence. And while we can question her decision to remain with her philandering husband, Alicia has been up-front about putting her children's needs and wants ahead of her own, even as she continues to fall for her boss, Will (Josh Charles), a former law school buddy with whom she missed her chance years earlier.

She might be the good wife of the title but Alicia Florick is also her own woman.

I sped through the first season of The Good Wife on DVD this summer and was immediately struck by how accomplished and self-assured the series was once it allowed its characters to breathe, allowing for a narrative that placed weight not solely on Margulies but on its gifted ensemble: Emmy Award-winner Archie Panjabi's cynical investigator Kalinda (who, it needs to be said, kicks ass), Christine Baranski's liberal partner Diane Lockhart, Matt Czruchy's ambitious climber Cary Agos, Mary Beth Peil's overbearing Jackie Florrick, and Cumming's fantastic Eli Gold.

The focus has also swung at times to sit upon Alicia and Peter's children--Graham Phillip's Zach Florrick and Makenzie Vega's Grace--who continue to grapple with the fallout from their father's bad decisions and sexual appetites as much as they do with the work-related absences of their mother. Wisely, the series explores the insidious nature of scandal, how the consequences infect not just the perpetrator but those around him.

As Zach and Grace attempt to protect their mother from a series of mysterious packages, they are drawn ever closer to the epicenter of the conspiracy, even as they deal with "normal" teenage angst: unprotected sex, privacy issues, strife with parents and grandmother alike. When Peter does return home--and does break his home arrest in order to chase after Alicia--it's their quick thinking that keeps him at home. It's the rare series that explores the bonds of love and forgiveness in such a nuanced fashion.

The first two episodes ("Taking Control" and "Double Jeopardy"), provided to press for review, retain the strengths of the first season while also throwing several spanners into the works for the team at Lockhart & Gardner. While Alicia may have won the competition and earned a spot at the firm, it came at a heavy price: she had to trade upon her connections and name in order to lure Eli Gold (and likely several of his clients) to the firm in order to keep her place. Cary, meanwhile, lost his job and has gone to work at the state's attorney's office for Glenn Childs (Titus Welliver), setting up yet another turn of the screw for the insatiable war between the SA's office and the Florricks, one that's even more personal as Cary knows Alicia's tactics only too well.

But at the firm, there's even more drama following the arrival of the new third partner that Will and Diane have been so keen to bring on board. While the two of them claim that they want a ref, what they really want is someone they can side against together. They'll find they have an uphill battle with Derek Bond (FlashForward's Michael Ealy), who clearly has an agenda of his own. While Will and Diane settled on Derek together due to a lack of prior connection, a question is raised at the end of the second episode that makes us question whether or not that's really the case.

And Bond's arrival also jeopardizes the role that Panjabi's fantastic Kalinda plays within the law firm as Bond has his own carefully cultivated investigator in Blake (Friday Night Lights' Scott Porter), who proves just as surprising and mercurial as Kalinda herself. He's just as fast, just as resourceful, and just as cunning and Kalinda but Blake also has an ace up his sleeve. One season in and we're still in the dark about Kalinda's past and even, quite possibly, her true sexual orientation. The Kings and Panjabi have done an incredible job making Kalinda sympathetic and intriguing even as they leave her backstory in the shadows.

And then there's Zach's troublesome ex-girlfriend Becca (Dreama Walker) causing trouble again for everyone. Just how much does Becca know? And did Eli's threats to her last season sink in? Look for things to get explosive among the younger generation enmeshed in this political battle, even as a familiar face from Peter's past returns to shake up the foundations of his campaign. Things are going to get nasty.

All of which adds up to a winning start for The Good Wife's second season. While there is already more than enough drama going on, the writers also concoct two provocative cases, one clearly inspired by the real-life WikiLeaks news story. Two murders, two very different clients, and two very different courtroom engagements, the second of which takes Alicia and Will to military court, and, um, Lou Dobbs. There's a delicate balancing act to these early episodes in the season run and the Kings and their talented writing staff manage to deftly pull it off.

You'll want to stay up late for this fantastic and engaging series.

Season Two of The Good Wife begins tonight at 10 pm ET/PT on CBS.