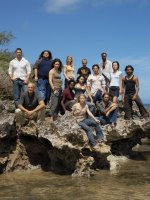 It seems like the island is getting a little smaller...

Just a day after Touchstone Television, the studio behind ABC's hit drama Lost, announced that they had signed a deal with French videogame maker Ubisoft to release a Lost videogame in December 2007, Variety is today reporting that the studio has partnered with toy manufacturer McFarlane Toys to create an action figure line based on characters on Lost.

First to be released will be six-inch articulated versions of Jack (Matthew Fox), Kate (Evangeline Lilly), Hurley (Jorge Garcia), Locke (Terry O'Quinn), Charlie (Dominic Monaghan), and (huh?) Shannon (Maggie Grace); their release will be tied in to Lost's third season premiere this fall. (Future offerings will include Sawyer, Eko, and Jin.) Each action figure will include a full-scale prop that is connected to their character: Kate's will include the model airplane, while Hurley will have a lottery ticket with those mysterious numbers. (Um, they do know that he doesn't actually have the lottery ticket on the island, right? Just checking.)

Additionally, McFarlane Toys will also sell deluxe boxed sets that recreate key Lost moments and locations, such as the beach or the hatch: Locke is shown discovering the hatch, Jack waking up after the crash of Flight 815, and Hurley creating his golf course. (Heh? That's really the best character moment they could think up for Hurley? Why not stuffing his face with peanut butter then?)

No word on when we can expect a Zeke/Sea Captain action figure... or the deluxe Dharma Initiative headquarters.

UPDATE: Special thanks to Televisionary reader Bart, who sent in the below sneak peek of the Charlie action figure from McFarlane Toys. 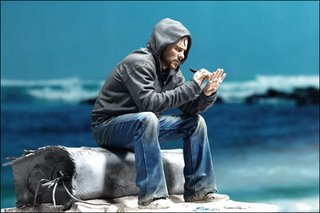 Anonymous said…
Hmm...can't decide if this is lame or cool. Guess I'll have to see the action figures first before deciding! But I think having a mini Locke in my house would totally freak me out.
5/23/2006

Anonymous said…
The figures will undoubtedly look amazing. You can look over the website at some of the licensed properties they've designed toys for... There's no denying that the company is good at what they do.

As much as I like LOST, I just don't how these characters would be appealing as action figures. They're all just normal-looking people wearing everyday clothing. Nothing exactly exciting about that.
5/23/2006

Anonymous said…
I am with Danielle, though I am leaning towards cool. In fact, I think "Sawyer action figure" will have to go on my hanukkah wishlist this year.
5/24/2006

That is super-detailed and the sort of work you'd expect from McFarlane Toys. Say what you will about the business decisions/ethics of founder Todd McFarlane, but the company produces breathtaking collectables.

Anonymous said…
Yeah, I've pretty much changed my opinion on how much appeal a LOST action figure could have.
5/24/2006

I've just realized what I want for my birthday. I think the Locke or Kate models would look pretty nifty on my desk here at the old office.
5/24/2006

Anonymous said…
My birthday is in August. I'm just saying.