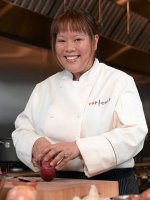 And then there were three...

I am stunned that Lee Anne was eliminated this week on Top Chef and that Dave--DAVE, people!--made it to the final three and earned a spot for the season finale showdown in Las Vegas. Surely, overall merit and week-to-week consistency and creativity should have played a role in the decision, over the truffled macaroni and cheese that Dave made, which somehow won him a spot. A top chef, Dave is not.

True, Lee Anne's plate was a little crowded with flavors: pistachio-crusted loin of lamb, butternut squash and truffle risotto, treviso, and a cherry-red wine-port sauce, the latter of which earned her accolades from many of the Napa Valley chefs who had been roped in by Tom Colicchio to judge this challenge.

But it certainly didn't help matters that after Lee Anne decided to use lamb for her dish that both Tiffani and Harold followed suit and also chose lamb (I think Dave's choice of beef also helped his odds)... and then Lee Anne was forced to serve her lamb dish third. After eating three extremely rich lamb dishes, even I would have been sick of the animal at that point.

But Dave? "Pepper Monkey" Dave, who in that same episode's Quickfire Challenge, served up the most sad looking, messy platter of uninventive nachos? Whose dishes have always paled in flavor and presentation to Lee Anne's beautiful and delicious fare? The contrasts between their culinary styles, presentations, and demeanor could not be more striking; again, just compare Dave's nachos to the beauty and elegance of Lee Anne's Japanese seafood hot dog with lotus chips... or even Harold's popcorn cakes with ceviche.

In the end, I think the real battle will come down to that between tough-as-nails Tiffani and eager-to-please Harold, who in recent weeks has really stepped up and produced some beautiful and inventive dishes. While I can't argue with Tiffani's skills as a chef, I think her attitude needs some serious adjustment. She likes a "quiet kitchen," snaps at fellow competitors, and claims to be able to admit her mistakes when just minutes earlier she refused to acknowledge that her cauliflower puree brought out too much acidity in the wine.

Harold has, at times, flown too far below the radar and been too outwardly altruistic (as with the Cannes prize that also somehow went to Dave), but with fewer competitors there he has really been able to shine and has done so, like Lee Anne, without stepping on anyone's toes. Yes, this is a reality show and it is a competition, but in the end, it's also about building an audience for your own restaurant. Why establish yourself as a diva and prima donna to the general public?

But I can only hope that, with Lee Anne out of the running, Harold takes home the prize and claims the title of Top Chef with his usual humility and grace. And, Lee Anne, if you're ever in Los Angeles or I make it back to NYC (I'm originally from there), I'll buy you a drink and we can celebrate. In my opinion, you'll always be the Top Chef.

The final episode of the hilarious spoof psychic show. Will Shirley's audiences finally realize that the joke is on them and revolt, killing comedian Mark Wootten? Probably not, but I'll be tuning in just to see if it happens.

On this week's episode of Doctor Who ("The Empty Child"), the spirit of an alien child is haunting London's bomb sites. Looks to be a seriously creepy episode... Shut the curtains, draw the blinds, and make sure you don't watch alone. ('Cause that would just be lonely.)