From Across the Pond: "Waking the Dead"

Let me begin by saying that I'm not usually a fan of forensic procedurals, those CSI-type shows that seem to have multiplied like bunnies and now fill up the majority of CBS's schedule. For the most part, they're standalone, tidily resolved formulaic mysteries that bare little resemblance to the character-centric nature of drama that I love so much. The same can't be said, thankfully, for British import Waking the Dead, which is currently re-airing its fifth season on BBC America.

I could say things like, "If you like Cold Case, you'll LOVE Waking the Dead," but I won't sink to that level, though the BBC's Waking the Dead, which preceded the arrival of the CBS forensic drama by a few years, is a far superior show. Both concern the cold case squad of a police authority and both solve crimes long left unsolved by their colleagues, but look at that title: Waking the Dead. Could any title be more evocative and compelling? In this case, the title draws the audience into a different sort of procedural--where, yes, the usual rules of crime detection and technology still apply--which is also a character-driven drama. The series is tautly written and beautifully acted and each episode leaves you wanting more (a feat after two hours of plot twists and turns.)

In Waking the Dead, our crime sniffers, detectives and lab experts alike, are layered, nuanced characters that are deeply (sometimes seriously so) flawed; not one of them is perfect and they all have their own agendas, when solving crimes. The show's writers are very careful to make sure that each crime impacts them in some meaningful, emotional way, whether reminding them of an unsolved case in their own past or a crime that they themselves experienced personally. Or just being emotionally invested in the case at hand. These are the coppers I want on my side if something ever happened; they're tenacious, willing to break the rules, and they get the job done, often putting themselves in harm's way, sometimes fatally. 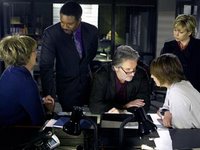 So who are Waking the Dead's remarkable cold case detectives then? The Cold Case Unit is headed up by Detective Superintendent Peter Boyd (Trevor Eve), a tough, intelligent bloke who's prone to outbursts of anger, but who is hiding his own loss as well: the disappearance years earlier of his teenage son, a case which was never solved. Boyd's need to get the job done trumps any other considerations and he's not above manipulating his team into getting results. (You wouldn't want him as a boss, believe me.) If Boyd is the disciplinarian father figure, Dr. Grace Foley (Sue Johnston), the team's psychological profiler, is his opposite. Grace is always professional, always calm and innately logical (which often infuriates Boyd). She's also willing, as the series goes on, to stand up to Boyd and put him in his place, something that no one else on the Squad has been able to accomplish. Perhaps that's why she and Boyd seem to have a working relationship that's based on total respect for one another. Detective Spence Jordan (Wil Johnson) is Boyd's right-hand man, a street-smart detective often offering up creative solutions and doggedly following leads. His one weakness: taking risks to the point of being a fatalist; if Spence isn't careful, he might just wind up a cold case himself. The team's forensic scientist, Dr. Frankie Walker (Holly Aird), is a workaholic who has completely given herself over to this job. Her unique skills at noticing every detail, whether big or small, made her an invaluable member to the Cold Case Squad. (Aird left the show after the show's fourth season.) Then there's the beloved Detective Mel Silver (Claire Goose), the newbie on the team when the show starts out. Over the course of four seasons, Mel manages to prove herself to Boyd and the rest of the squad. But sadly, she's pushed off the top a building to her death at the end of Season Four, while solving a crime. I grew to love Mel and her death rocked me--and the Cold Case Squad--to the core.

At the start of Season Five, which is currently airing on BBC America, the Cold Case Squad received two new additions: Detective Stella Goodman (Felicite Du Jeu), a young detective of Anglo/French origins who harbors a secret of her own, and Dr. Felix Gibson (Esther Hall), a new forensic scientist hired to replace Frankie (who left to return to research after Mel's death). Felix is a thirtysomething divorced woman (don't let the male name fool you) who's just as focused on her work as Frankie was but who hasn't yet found her role in the team. 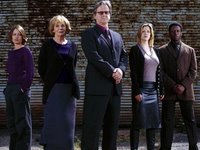 Waking the Dead offers smart, intricate mysteries that don't talk down to the audience or take them for granted. Each two-hour episode (yes, each episode is actually two-hours, including commercials) is a smart, taut thriller that could function as a mini feature film. One of my favorites to date is still the Season Two episode "Thin Air," in which the team investigates the disappearance of a teenage girl from Hampstead Heath and Boyd becomes personally involved in the investigation to the point of making a terrible, terrible mistake.

Ultimately, Waking the Dead is a superlative television mystery, bringing gripping, challenging mysteries to the table each week, along with compelling, multi-dimensional characters that you grow to love... or love to hate. If you've missed the previous four seasons, it's not a problem as Season Five is the perfect jumping on point for new viewers. And with the many permuations of CSI--along with Cold Case, Without a Trace, and Law & Order--all in reruns this summer, do yourself a favor and catch this brilliant, astonishing series. You and your television will thank me.

On another episode of the British import, style experts Trinny and Susannah use their infamous cruel to be kind approach to help women look their absolute best on and off the beach.

The two-hour season finale is finally here and I am counting down the hours! On tonight's double-sized episode ("Live Together, Die Alone"), Jack and Sayid plot to confront the Others and launch a daring rescue of Walt, while also keeping an eye on the traitor Michael before he stabs them in the back. Meanwhile, Eko and Locke argue over that darn button, the hatch, and the work being done there. (I smell a brawl coming.) And we might just learn the answers to a few burning questions: What's with the sailboat? Can Walt be saved? Will we ever learn the true meaning behind the Dharma Initiative? Where's Desmond? (I guess we'll at least learn the answer to that one. He shows up tonight.) Fire up the TiVo, take the phone off the hook, and prepare to wait a loooooong time until we get new episodes in October.

On Part Two of the Top Chef season finale ("Finale"), chefs Harold and Tiffani face off in the final culinary showdown in Las Vegas. At stake: a $150,000 cash prize, a Food & Wine magazine spread, and the dubious title of Top Chef. While I still can't believe that Dave even made to the final three and Lee Anne didn't (remind me how that happened again), I will be cheering for Harold to win. Or at the very least, unmask host Kathy Lee Joel as an android...

Anonymous said…
"Waking the Dead" is an amazing show. Not only is it better than any procedural show on television but it's also better than most recent crime/thriller feature films as well.

The cast is superb. The writing is intelligent. And the mysteries are complex and thrilling at the same time.

I have never liked "CSI" or any of those shows but the "Waking the Dead" series is something not to be missed. Nobody can do mysteries like the Brits.
5/24/2006