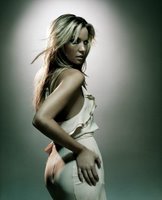 Welcome back to the latest installment of Dancing with the Upfronts, a recurring column where I try to make sense of the sometimes bewildering (and often conflicting) information coming out of the networks regarding series renewals, cancellations, and orders.

With NBC's schedule already locked for fall, all eyes are now on the other four networks as they put the finishing touches on their schedules.
(Updated as of 3:00 pm PST)

Lips have been sealed at the venerable Eye network as very little information has come out about orders or cancellations. However, CBS has just given series orders to two dramas, just a few days before their official schedule is announced. Jericho, from CBS Paramount Network TV and Junction Entertainment, has been given a greenlight for fall. The drama, which stars Ashley Scott (above), Skeet Ulrich, and Gerald McRaney (among others) concerns a small town after an apocalyptic event.

UPDATE: I can now confirm that the James Wood-lead Shark, about a celebrity attorney who becomes a prosecutor, has received a series order from CBS. In other CBS news, an imminent renewal is expected for the David Mamet and Shaun Ryan-produced drama The Unit, while Courting Alex, Out of Practice, and Still Standing will not be returning next season.

FOX has renewed freshman comedies The Loop (for 13 episodes) and The War at Home, along with fading drama The OC.

ABC has cancelled Invasion, Hope & Faith, and freshman comedy Freddie. The fate of comedy veterans According to Jim and The George Lopez Show are still up in the air.

Still no official word on any series orders from the fledgling network though The Hollywood Reporter has repeated the word that, of the four drama pilots currently under consideration at the CW, only Darren Star's drama Runaway was said to be in "serious contention," along with CBS' aborted pilot Ultra, as previously reported.

But more promising was THR's indication that fan-favorite drama Veronica Mars is "[looking] likely to make the switch to CW."

* * *
Recap: This week, the networks will unveil their fall schedules before advertisers at the annual upfront presentations. ABC and MyNetwork are set for tomorrow (May 16th), CBS on Wednesday (May 17th), with FOX and the CW on Thursday (May 18th).

Anonymous said…
Awesome news about Jericho, it sounds eery and cool. Loved Miracles with Skeet....hope it's as good as that!
5/16/2006