Brains Triumph Over Brawn on This "Race" 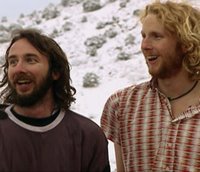 As if I would let BJ and Tyler's win on The Amazing Race go without comment!

While last night was a rather crowded television night in my house (Race finale, Lost, Top Chef, etc.), my girlfriend and I were very careful to schedule our televisionary jaunts around the two-hour Amazing Race finale. Who would cross the finish line first: the evil but lucky frat boys, the earnest if a little excitable hippies, or the likeable but prone-to-getting-lost Ray and Yolanda? (Congrats, BTW, Yolanda on your engagement, but Ray, couldn't you have picked a better way to propose than live on the Early Show?)

I was overjoyed and exhilarated to see that the hippies triumphed over the misogynistic frat boys... who, truth be told, aren't even frat boys at all; they're college dropouts, a fact that Phil seemed to be rubbing in Eric and Jeremy's faces. So I was thrilled for the well-traveled and hirsute polyglots when the final challenge came down to a joint memory/flags of the world task that combined the Race's love of sending contestants running blindly into a field filled with things with being forced to remember the order of the legs they traveled, which flags corresponded with those countries, and then arranging those flags in the correct order.

I was on the edge of my seat while the hippies figured out that they had to shift all of their flags down in order to accommodate the Russian flag (when was the last time you read that in a TV recap?) and then sprinted to the finish line, where even the loathsome MoJo seemed to be genuinely pleased that BJ and Tyler, who had barely squeaked by elimination not once but twice, were the victors. And even Ray and Yolanda seemed happy at coming in third place, having gained an appreciation and respect for one another through the race.

Meanwhile, Eric and Jeremy had to fight to hold back salty, salty tears of shame at being second place. I'm not sure which hurt more: losing the race, or losing the race to the hippies. But being all uptight about Tyler "lying" about seeing the sign on the rollercoaster at Fujiku Highland? Um, dude, you cancelled everyone's cabs (a move which made Rob look like a sportsman).

All I can say is that if you believe in the principle of Karma (or TTOW), the right team won. And as for the losing team? Well, they can just go back to their day jobs.

Brock said…
i saw the hippies leaving thailand in real life. ive kept that in for months!
5/18/2006

Anonymous said…
Happy hippies! I really thought that the Frat-Boys-Who-Aren't-Really-Even-Frat-Boys were going to win and was soooo happy that the hippies pulled it off. Karma, baby!