May 12, 2006
Welcome back to another installment of Dancing with the Upfronts, where I try to make sense of the sometimes bewildering (and often conflicting) information coming out of the networks regarding series renewals, cancellations, and orders, before the upfronts next week. Whew. (Updated as of 11:30 pm PST) 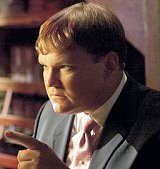 With pick ups already in for those three dramas plus Studio 60 on the Sunset Strip, The Black Donnellys, and Kidnapped, it means that NBC has now ordered all but one of its seven drama pilots for the fall. The only drama not to get the nod from the Peacock is the Cary Elwes-led political dramedy Haskett's Chance about a corrupt politician.

Untitled Tina Fey is still widely expected to get an order for the fall. However, there appears to be a rather significant spanner in the works, according to Variety, which says that "NBC U Television Studio [needs] to hammer out a deal for star Alec Baldwin so that the skein could premiere in the fall."

One rather odd piece of news. Various sources (including yours truly) had heard word that NBC had passed on comedy pilot Andy Barker, P.I. and that the pilot, which stars Andy Richter and Tony Hale (Arrested Development) would be shopped to FOX. However, TV Tracker sent out a Series Pick Up Alert for the pilot this morning and is reporting that NBC has granted the pilot a six-episode series commitment.

Andy Barker is a CPA who has never failed at anything – that is until his new accounting business doesn’t take off as planned. When he’s mistaken for the private detective who used to occupy his office, Andy embraces this twist of fate and takes the case. Thus begins his journey back and forth from Andy Barker, CPA to Andy Barker, P.I. Whether chiding criminals headquartered in a warehouse for “renting instead of buying,” or briefing an accounting client about municipal bonds while driving backwards down an alley pursued by Sri Lankan gangsters, Andy will always be a problem solver and a numbers cruncher.

While I am a huge fan of Richter and Hale and am looking forward to the series (if it does make it on the sked), color me confused. Can anyone shed some light on this matter?

UPDATE: I've since received confirmation that the above is true and Andy Barker, P.I. has been ordered for six episodes. Wahoo!

The Eye is still firmly shut as no official orders have yet to drip out. (And many say that no one will have any idea about the fall schedule until Les Moonves makes his announcement on Wednesday.)

Dramas that CBS is said to be particularly strong on include Jericho, Smith, Shark, and 3 Lbs. Said to be losing steam, according to the tracking boards, are Company Town and Capital Law, with terminally ill pilots Waterfront and Edison clinging to life. Long deceased: The Way, Orpheus, and Ultra (though, as reported yesterday, it might be redeveloped for the CW).

Rumors on the tracking board re: comedy pilots have Inseparable as a strong contender, with Big Bang Theory, Untitled Tom Hertz, and Untitled Paul Reiser still floating about in the mix. Slipping away from this world: You've Reached the Elliotts, Welcome to the Jungle, and Play Nice.

However, it seems as though long-running comedy The King of Queens won't return to CBS next season until mid-season, if at all.

The problem? According to Variety, Star Kevin James is committed to star in feature film I Now Pronounce You Chuck and Larry with Adam Sandler and is unable to film enough episodes for the fall. 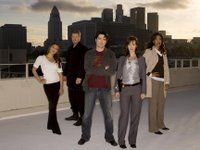 While FOX didn't officially pick up any other pilots yesterday, rumors are swirling that FOX will add comedy pilot Happy Hour to its fall schedule. Additionally, The Winner and The Adventures of Big Handsome Guy and His Little Friend are said to be close to joining ordered comedy series 'Til Death on FOX's fall schedule as well. Still alive: Julie Reno, 12th Man, and If You Lived Here You'd Be Home Now.

UPDATE: Late in the day Friday, FOX officially ordered the aforementioned comedy Happy Hour from creators Jeff and Jackie Filgo (That 70s Show) and The Winner from creators Seth MacFarlane and Ricky Blitt (Family Guy). Happy Hour is being described by TV Tracker as "a buddy comedy series about two different, but non- complementary guys in Chicago. One's been damaged by love, and another's been blinded by love."

Meanwhile, The Winner is about "a successful man in his forties who looks back at his life in 1994, when he was a neurotic 32 year old man who still lived with his parents, and befriended the teenage son of a woman he was pining for and discovered that they were both going through adolescence."

On the drama-side, no new orders aside from the already-reported Primary (above), Vanished, and American Crime. Other drama series contenders include Southern Comfort, Damages, or Beyond. 13 Graves is clinging to life, while Faceless and The Wedding Album are dead, dead, dead.

UPDATE: Miracles can happen. Even later in the day Friday, FOX gave a series commitment to previously thought deceased pilot The Wedding Album, which stars Bruno Campos (Nip/Tuck) as a wedding photographer. I am speechless.

UPDATE: The award for the series that would not die goes to... 7th Heaven?!? Whah huh? Despite the rumors of the show being cancelled, then returning, then not returning, a well-placed agency source tells me that 7th Heaven WILL BE returning this fall after all. The move doesn't bode well for some of the WB's on-the-bubble series such as Everwood and One Tree Hill, which will most likely not move over to the CW.

UPDATE: The Futon Critic has now confirmed the above rumor regarding 7th Heaven and is reporting that the CW has officially renewed the long-running family drama for an 11th season (and its first on the CW).

UPDATE: According to another hot-off-the-press Series Pick Up Alert from TV Tracker, ABC has ordered all of the following drama pilots to series: Brothers & Sisters, Men in Trees, Ugly Betty, and Traveler. Four pilots ordered in one fell swoop? Only in this surreal upfront season...

Another rumor, coming to me from a certain talent and lit agency, says that ABC is renewing low-rated relationship drama What About Brian for next season. That's even more shocking than the above pick-ups.

Coming off the tracking boards, dramas on life-support at the network include: Secrets of a Small Town, Twenty Questions, and October Road. Dead with no chance of a sudden revival a la Lost's Libby: Hollis and Rae, Enemies, 60 Minute Man, Women in Law, and House Divided, though the latter may be retooled as a mini-series.

UPDATE: On the comedy side, ABC has just ordered Let's Rob Mick Jagger and A Day in the Life.

Untitled Christine Zander/Patty Heaton, Separated at Worth, and The Guys are said to still be in the mix. Dead as dodo: Untitled Bonnie Hunt, Girls on the Bus, and Women of a Certain Age.

* * *
Recap: Next week, the networks will unveil their fall schedules before advertisers at the annual upfront presentations. NBC is up first on Monday (May 15th), ABC and MyNetwork follow on Tuesday (May 16th), CBS on Wednesday (May 17th), with FOX and the CW on Thursday (May 18th).

Todd said…
Sorry to be a broken record, but. . .any Veronica Mars news?

I heard earlier this week it was as good as done. Then I heard today that it was in serious danger.

Anonymous said…
Excellent news about "Andy Barker." I was a huge fan of "Andy Richter Controls the Universe" and I love Tony Hale. Could this be a comedy match made in heaven? I think so.
5/16/2006