Failing Grade for CBS' "The Class" 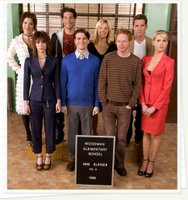 Sitcoms are tricky things nowadays, what with the push-and-pull between single-camera and traditional multi-camera, lowbrow yet commercially successful fare like According to Jim versus nearly serialized cerebral comedies like Arrested Development. It's an odd time for traditional situation comedies, which many have said are clinging on for dear life.

Enter CBS' answer to that ongoing dilemma in the form of The Class, the new sitcom created by Friends creator David Crane and Mad About You's Jeffrey Klarik, which seems a blend of both new, modern comedy storytelling and traditional sitcom setup, along with a 30-minute advertisement for Classmates.com thrown in for good measure.

While CBS was generous enough to send me the first three episodes of The Class, I have to admit that I was only able to get through the pilot (and barely at that). The Class seems a throwback to the mid-90s where comedies about twenty-somethings were all the rage. In this case, they might not be gorgeous and successful Manhattanites who spend all day sipping oversized lattes and chatting, but rather the diverse third-grade classmates of Ethan (Jason Ritter) who organizes a party celebrating the 20th anniversary of the day he met his fiancee and reunites many members of their class.

The overall premise feels entirely contrived and ridiculous and I just really couldn't suspend my disbelief. Why on earth would these random people reunite at some guy's house 20 years later? (We're supposed to believe that people even flew into town for this exclusive gathering, no less.) The group is an "eclectic" mix of diverse personalities, some of whom are successful and married, some still live with their mothers, and some are still trying to figure things out. And others still are suicidal, like Ritchie (Jesse Tyler Ferguson), who decides to come to the party rather than kill himself when he gets the invitation. Isn't that just... hysterical?

Of course, Ethan's plan fails miserably and his fiancee dumps him right there in front of all of these strangers who have nothing better to do but attend impromptu reunions of their elementary school classes. And, wouldn't you know it, the class decides to stick together and become friends, weaving in and out of each other's lives.

Which leads me to my main complaint with the series: I'd be able to overlook the forced premise if the show were, you know, actually funny. But sadly, it's not funny at all, much less amusing. It's sappy and nearly soapy and, while downright staid, seems to think that it's being ground-breaking and subversive with its nearly serialized format. But unlike Arrested Development or British series 'Allo 'Allo (which both successfully toyed with ongoing comedic storylines and multiple plotlines in their day), The Class doesn't present us with characters that we can connect with or care about. Instead, they seem like stock archetypes straight out of central casting: sensitive guy who gets his heart broken (Ritter) and must pick up the pieces; a fierce girl whose sarcasm belies a heart of gold (Lizzie Kaplan); a quirky, unlucky-in-love girl with a penchant for "jaunty" hats (Heather Goldenhersh in a performance that made me question if she were actually mentally challenged); a nerdy, suicidal guy who finds a reason to live (Ferguson); a formerly popular guy (Jon Bernthal) who lives at home with his overbearing mother (Julie Halston); the prettiest girl at school (Andrea Anders) who is now married to an older former pro-football star turned shill (David Keith); an uptightly corporate wife and mother (Lucy Punch) who never got over being dumped at the prom by a guy who's now (wait for it!) gay and in a same-sex relationship (Sean Maguire, putting on a decent American accent). If those descriptions seems overly simplistic, they are. When you're introducing about 12 series regulars in the first episode alone, you better make sure that they're layered and nuanced off the bat and not one-dimensional stereotypes.

But I think I've said enough. Ultimately, this is one Class that just doesn't make the grade.

On tonight's episode, the final five contestants find themselves under even more pressure than before. And for Laura, it looks to be too much to handle. Will this fiery (and pregnant) red-head cave in? Or keep fighting?

Anonymous said…
I definitely liked this pilot more than you did, but didn't love it by any stretch. I thought it had its moments and was definitely better than I thought it would be, but mostly it was pretty forgettable. I wish there were a few less over-the-top characters and less stereotypes and cliches. There's something there, but they haven't found it yet.
9/13/2006

Todd said…
It gets better in episode two, when it's not so burdened by its attempts to set up a ridiculous premise.
9/13/2006

Anonymous said…
I felt exactly the same as you.

I thought that one actress was mentally challenged too.
9/13/2006

Unknown said…
I watched this pilot last night and thought it was very weak. Heather Goldenhersh is like a mentally impaired Jennifer Tilly, if that's even possible. I think David Crane is a smart guy and his boyfriend Jeffrey Klarik is a great joke writer but this show doesn't work. Casting isn't very good either. It's sitcom-by-the-numbers. Disappointing.
9/13/2006

Tidmore said…
I have to say I enjoyed this show. I went to a taping of the second episode at the beginning of August and they showed us the pilot. Now I know it had it's flaws (mainly the sister who apparently doesn't speak English) but it does get better in Episode 2. The best character by far is Richie, the suicidal red head, and he's got much more to do in episode 2.
But here's my main argument for the show, it has potential to get better. Take a look back at the first few episodes of Friends and Seinfield, and I think you'll agree it wasn't the classic, hit show it was after it went on for awhile. I only hope that CBS will give it a fair chance to gain an audience and grow.
And I urge you to give the 2nd episode a try, watching them film it, it had it's moments, and with any luck the 3rd episode will keep improving on what could be a great show.
9/21/2006

Unknown said…
I agree the show did not make a big splash in that premiere. However, it was not the premiere that hooked me. I was on a cardio machine at the gym when I turned on the TV and happened to watch episode three, my first time ever hearing about the show and seeing it. I laughed so hard and much I was hooked right away.

I went home and was glad to find all the first two episodes on cbs.com. This is when I noticed the premiere was not so great, but it did get me to speed with who the characters are.

Most people may not relate to this if you did not attend a private school or another small class setting. I did. There was only 16 of us for my first 8 years of classes.

So this show may not reach many of you, but it does have an audience and I like others am hooked. I have to rewind the show so many times throughout an episode to laugh again at the parts that humored me.
11/20/2006

Unknown said…
I definitely agree with Ryan. I find the show hilarious, and it definitely does get much better after the pilot.

It's funny though, I also thought that Lina had a mental disability based on how she was talking...

Anyways, I think the show is great and I can't wait for season 2.

Anonymous said…
Umm, jace, you do know CBS ordered more episodes after the first season, right? It is coming back.
12/30/2007

Jace Lacob said…
Anonymous, CBS has NOT renewed The Class. The series finale aired March 5, 2007. It is NOT coming back, additional episodes have NOT been ordered, and all 19 produced installments aired during the 2006-07 season. The series is over.

Don't know where you are getting your information, but they are clearly ill-informed and wrong. End of story: the show has been cancelled and is not returning.
12/30/2007

Anonymous said…
I loved the show. I think critics are blind. There are lots of reasons people can't watch a show. How I Met Your Mother is my new favorite in place of The Class, but I go to school Monday nights, and unfortunately have to watch it either from taping it, or on cbs.com from their web video. The station should have taken that into consideration. The Class was a comedic hit. Everyone I know who watched it (critics hate life and themselves--they don't count)loved it.
10/24/2008