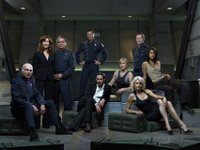 While the third season of Sci Fi's Battlestar Galactica might not launch until next month (October 6th, to be precise), I hope that fans of BSG will check out the 10-installment webisode series "The Resistance" currently airing on SciFi.com. (Installments will be posted every Tuesday and Thursday leading up to the series' third season premiere.)

While I've been lucky enough (thank the Lords of Kobol) to watch the first six episodes of Battlestar Galactica's next season (and seriously, WOW, they pack quite a wollop), I can already tell that the webisodes will fill in the blanks a little bit between that fantastic one-year later second season finale and the two-hour third season premiere ("Occupation"/"Precipice").

The first webisode installment went live yesterday and follows the Human Resistance movement on New Caprica. A scruffily bearded Chief Tyrol (Aaron Douglass)--look for that beard to mysteriously disappear a few episodes in without any explanation--holds court in his settlement tent with Colonel Tigh (Michael Hogan). Tyrol's now a proud papa and wife Cally (Nicki Clyne) seems to be settling into her new role as wife and mother, despite the presence of Centurions and human-model Cylons on their new-found world. Tigh and Tyrol are trying to drum up support for the Resistance movement. They need followers and fast...

And so two familiar faces return... former Viper pilot Duck (Christian Tessier) and former pit crew Jammer (Dominic Zamprogna). Despite what's going on on New Caprica, Duck is blissfully happy with his fiancee Nora and looking to start a family; he doesn't want to get dragged into this conflict. (Um, for those of you out there, don't get too attached to Nora...) Jammer on the other hand is ready to do something. He thinks that the humans joining the newly minted police force are nothing more than dirty collaborators, but someone's got to patrol the streets of New Caprica and shouldn't it be someone other than Centurions?

Can Tyrol and Tigh recruit Duck to their cause? And what kind of homemade moonshine is Tigh drunk on? 'Cause he seems more than a little loopy to me. However, look for the silver-haired tactician to become a leader on this Cylon occupied-planet and step up in a way he never did under Adama on the Galactica...

As for what happens after that, I'm not spilling any spoilers about Battlestar Galactica's third season. You'll just have to watch it for yourself. But I will say that Moore & Eick are picking up the threads of quite a few dangling storylines in just the first few episodes alone, whilst creating a whole bunch of exciting new ones. Look for friendships to crack under unexpected pressure and new alliances to be formed in the face of such a dangerous enemy. As for the traitorous Gaius Baltar (James Callis)? He's got quite an interesting journey ahead of him...

Only a few more weeks to go until Season Three, but I promise that the wait is definitely worth it.

On tonight's episode, the designers are still in Paris and part of their challenge involves attending a party, only to find themselves pelted with eggs by unhappy locals. Le sigh. Everyone's a critic...

Anonymous said…
I will definitely be checking out the "Battlestar" webisodes as I can't wait for the new season to begin!
9/06/2006