Recycled: Repeat Adventures in the Rag Trade on "Project Runway" 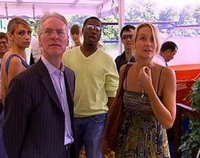 So imagine my frustration when I realized that my beloved TiVo was correct after all (as were several of you Televisionary readers): last night's Project Runway was not an original episode, despite no warning the week before from Bravo. Le sigh. I've been looking forward all week to the final four, but alas. We'll have to wait yet another week for the first Kayne-free installment of Runway.

I already miss the guy.

Since it was a repeat this week, I thought I'd take the opportunity to take a look forward, if you will, at our final four contestants, whom it seems will be presenting their individual shows at Fashion Week at Bryant Park in New York City. A certain reality series producer associate of mine tells me that the current theory is that this year's final four will indeed be a final four and that there won't be the red herring of the past few seasons with the three finalists and the auf'd fourth giving shows. Heidi herself seems to be supporting this with her cryptic comments about a game-changing twist (ugh, not another one) and saying that this season, they are committed to a final four. Hmmm... Looks like there might be an even bigger challenge than just a runway collection challenge...

So who's still in the running to take home the couture crown?

First up: my personal favorite of the bunch, Michael Knight. I think that 99% of Michael's designs have been gorgeous and wearable and then show really poise and vision. I loved the Harlem-meets-the-Hamptons jet-setting ensemble he created for himself, the Pam Grier outfit he did a few weeks ago, the coffee-filter dress he created in Week One, the recycled bustier, wrap, and skirt from the trash challenge, last week's black-and-white dress... the list goes on and on. He even attempted to do hand-sewn rouching in the Paris couture challenge, even though that's what got Malan eliminated way back in Week Two. He's brave, confident without being arrogant, and has the best sense of how to dress a woman for a variety of moods and occasions. Plus, I feel that he's retained the best sense of self in his designs while also proving that he's versatile and comfortable working in a variety of style, even with severe artistic constraints. If he doesn't take home the top prize, I will throw something expensive and tasteful at the television.

Next up: Uli Herzner, whose mind-blowing use of fabrics and patterns has made her an instant hit in my household. Her style is so contemporary and wearable, with flattering and fun silhouettes that would look amazing in any climate. However, many of her designs are a bit too whimsical for cities other than Miami, Los Angeles, St. Tropez; can her playfully relaxed style work in New York or London? Many have criticized her for basically sticking to the same design most weeks and switching the patterns a bit, but she does so beautifully every time. She is an absolute genius and I can see her line being instantly successful among a certain clientele that wants breezy cocktail dresses and doesn't shy away from bold, provocative patterns. But can she get the judges past their preconceived notions about what they claim is her one-note design aesthetic?

Then there's Jeffrey Sebelia who's rock and roll sensibilities are notoriously hit or miss. Jeffrey has the distinction, week to week, of either ending up in the top of the pack (he won two back-to-back challenges) or at the bottom, a rare stylistic syndrome that constantly confuses and bewilders me. When he's on (as in the jet-setting or couture challenges), it really works. His yellow plaid couture gown was in keeping with his design principles but also seemed completely at home on the runway, with a gorgeous and daring cut and bold color that was definitely different from his other designs. But can he design clothing that's less rock and roll and more elegant? Is his style too easily pigeon-holed?

Finally, there's Laura Bennett. I've been sort of back and forth about Laura in recent weeks as she seems far too often to be designing primarily for herself. There's a very vintage 1940s element to her work without any real sense of modernity or conscious effort to update these designs for mass appeal. And her outfits are often far too simplistic for my taste (the For Nuts Only dress, for example). That said, her construction is always faultless and her updated Roaring Twenties cocktail dress from last week showed a youthfulness and playfulness that had been lacking in many of her ensembles. While I love her style and the sort of return to classic Katherine Hepburn silhouettes and shapes, can she do something really modern and head-turning? Can she step outside herself and design something that would be really different and daring?

Ultimately, I hope that the final three contestants are Michael, Uli, and Laura. But I am already jittery with anticipation at the thought of seeing runway collection shows from all four of the remaining designers. As a group, you couldn't pick four designers with less in common, both in terms of history and personality as well as style and vision. It's promising to be a fight to the finish but I've got my fingers crossed that Michael comes out on top in the end.

Who do you think should win this installment of Project Runway? And which unlucky contestants will receive the final air kisses and auf wiedersehen's from Heidi?

Before I leave you, special thanks go out again to "Christine Fortune" for filling in for me on the weekly Runway update last week; she delivered a fun, fierce, and fashionable fill-in for our favorite reality fix.

Next week on Project Runway: the final four contestants go head to head (really this time, I promise!).

It's the season premiere of My Name is Earl! On tonight's episode ("Very Bad Things"), Earl takes Joy's side when she and Darnell have a fight. Ouch. Something tells me this will not end well for Darnell or Earl.

It's the third season premiere of The Office! On tonight's episode ("Gay Witch Hunt"), Michael outs grouchy and gay Dunder-Mifflin employee Oscar, while the audience learns what's happened to Jim and Pam since that kiss. Yes, that kiss. Here's a hint: it's dealt with in the opening scene. Let's just say that there aren't wedding bells for anyone in this ongoing love triangle...

Six strangers discover that their lives are seemingly connected in the latest drama from producer J.J. Abrams. Read my original review (way back when in June) here.

Continuing tonight on BBC America: a 2004 Brit mystery series starring Amanda Donahoe (L.A. Law) and Kris Marshall (My Family) as pair of terribly mismatched police partners. In tonight's episode ("Mr. Right"), how exactly did a young woman and her lover die from a single bullet while laying together in a hotel room? Find out tonight.

Anonymous said…
I'm happy with the final four. As you said, they each have *very* distinct style so it should make for an interesting showdown. I am definitely hoping that Michael comes in first place, though.
9/21/2006

Anonymous said…
Not to be too picky but everytime Bravo ran an ad for the next new episode of PR, they did say it would be in two weeks and on September 27th. But I was still hoping for a new episode because I'm addicted!
9/21/2006