Just When You Thought it Was Safe to Go Back on the Catwalk: Two Contestants Return on "Project Runway" 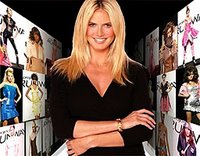 Hello there Televisionary readers. Christine Fortune here filling in for Jace while he’s jet setting in London (lucky dog). Not to worry, I am equally as obsessed with Project Runway and there certainly was a lot to talk about in this week’s episode, so let’s get to it!

It was down to the final five…that is, until my runway nightmares became a reality as both Vincent and Angela returned to the catwalk. In a frightening twist, these two fashion failures were allowed to compete in this week’s challenge as an extra bonus for having won previous challenges. And, because of this, three people would be going home. The other designers received the bad news while attending a L’Oreal “party” (they were the only ones there) and were not happy when confronted with Vincent and Angela’s smiling faces. As Kayne so delicately put it, “It’s like cockroaches. You step on them once and they still keep crawling around.”

Cockroaches or not, all designers were given the task of creating a cocktail party outfit comprised only of black and white fabric. And to make the challenge more difficult, every piece of fabric they bought had to be used. This led to some rather, um…interesting uses of fabric such as Vincent’s awkward cape/scarf, or Jeffrey’s thigh high faux leather tights. Michael, always the star, made a beautiful purse out of his scraps while Uli cleverly (if not totally successfully) contorted hers into a necklace.

And then there was Angela who decided to “line” a purse with her extra fabric, which, apparently, is design speak for stuffing the scraps into a bag where no one can see them. Watching her dispose of the offending fabric reminded me of a kid trying to hide brussel sprouts under a napkin. Very classy. Luckily, the judges called her on it and I watched with glee as she wriggled under their disapproving gaze. Her Cruella DeVil-inspired cocktail dress (complete with leather shrug and Edwardian collar) thankfully did not make the cut and she was forced to take the design walk of shame for the second time.

Also facing the firing squad for the second time was Vincent. How he ever won a challenge or stayed in the competition as long as he did is one of the great mysteries of all time. I was beyond relieved when the judges tore apart his yawn-inducing dress with the too short skirt and too long cape (or whatever that was). But even after being eliminated twice, Vincent was still sure of his abilities, mumbling something about “making beautiful music.” Music? Did he think he was on American Idol?

But the real surprise of the runway was Laura who, after having an array of difficulties on this particular challenge, walked away with the top prize. The judges were impressed by her fresh, youthful-looking dress and commended Laura on breaking away from her more mature-looking designs. I agree that the dress was a diversion from her normal tailored fare but I think that first place should have gone to Michael whose hip, modern design happened to be the only white dress in the showcase. As judge Michael Kors noted, his model looked gorgeous from head to toe.

I would have been happy saying auf wiedersehen to just Angela and Vincent this week but, unfortunately, someone else had to go. Surprisingly, it came down to Kayne and Jeffrey, both who were chastised for being too repetitive in their designs. It was Elvis vs. Gwen Stefani and, sadly, The King lost. The judges were impressed that Kayne had toned down his design this round but it was too little too late. I will definitely miss Kayne and his amusing commentary, which he continued right up until the very end with, “I’m not a bitch. I just play one on TV.”

Now there are only four contestants left on Runway. Let's just hope that no more cockroaches crawl out of the cracks.

Two back-to-back episodes of My Name is Earl tonight, presenting both the beginning and end of the comedy's first season. On the first episode tonight ("Pilot"), Earl has an epiphany which prompts him to stop his stealing, cheating ways after he wins the lottery and is promptly run over by a car. (Karma.) Afterwards, it's the first season finale ("Number One"), in which Earl tries to cross off the first item on his list, only to discover that he owes all of his lottery winnings from the guy he stole $10 off of.

It's the second season finale of The Office ("Casino Night"). You know, the one in which Dunder-Mifflin throws a charity casino night, Michael is torn between Jan and Carol, and, oh, there's something about a certain kiss...

Anonymous said…
I loved Laura's dress, and would like one for myself.

However, I really thought Michael should have been the winner. i was happy for Laura, though.

Uli, she is beginning to get on my nerves. If she says that one more thing is "shocking"....

I was so happy when I saw Vincent and Angela's dresses, cause I knew there was no chance they'd be sticking around.

I was really hoping Kayne would squeak through once more and we could get rid of Jeffrey. Alas...

Jace Lacob said…
Where is everyone this week? I take a week off to go to London and suddenly no one's commenting. Bizarre. I thought that "Christine Fortune" did a truly fantastic job filling in for yours truly whilst I was in London.

I was happy to finally sit down and catch the Runway episode in question and I have to agree that Michael should have won, despite the strengths of Laura's design (and, yes, she did break away from her more "mature" designs with a fresh, youthful look on the runway this week). Michael's design and overall styling (and that bag!) were perfect.

If Michael doesn't win this competition, I will begin to scream at my telly. From Week One, he's been entirely consistent and his designs are, 9 times out of 10, gorgeous, stylish, and wearable.

Angela? What is there to say? I was glad that she was taken to task for stuffing the excess fabric (or "lining it") inside that bag. Merchandising, my Ted Baker-clad ass. Puhlease. At least the judges were paying attention. But I was hoping that Tim Gunn would have called her out more for gross misconduct in the studio. She should have been disqualified right there and then, especially as Michael and Laura managed to create gorgeous handbags and Uli... created an interesting, if heavy, necklace.