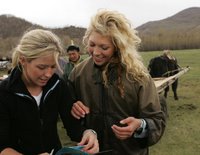 I really don't want to make fun of the Beauty Queens.

After all, it is a bit like shooting fish in a furry Mongolian barrel. But I just can't help it. Especially, when they issue proclamations like, "We gotta do this conspicuously," when talking about a furtive info-gathering mission at the station. Sorry, girls, but you're gonna have to be a little less conspicuous about fulfilling some stereotypes about blondes on the Race.

That said, Dustin and Kandice almost walked away with the lead in the second leg of The Amazing Race last night... if they could have gotten a handle on where all of their Mongolian gear was at all times. Why exactly was that helmet so hard to keep track of? (I'd ask Erwin and Godwin the same question.)

First place ended up going to uber-competitors Sarah and Peter, despite switching their detour task not once, but twice. I have some serious reservations about this team. I absolutely adore Sarah and think that she is simply amazing for being able to, not just keep up with the pack, but remain in front of the other competitors, even with a prosthetic limb. (She scaled the freaking Great Wall, people.) Her nonchalance at switching out her metal curve attachment for the foot was astonishing, as was the fact that, while she got teary with frustration during the weird-oxen-challenge, she never had a mental breakdown (not like Kimberly, anyway).

That said, Peter totally weirds me out. Sarah is so calm and collected and he's so intensely high-strung. Plus, their relationship seems to have no romantic dimension whatsoever; they're more like student and coach than boyfriend and girlfriend. Even when he's being positive (and not nagging her), he comes off as though he's *lecturing* her, a fact that I was happy to see that Sarah has picked up on. I'm glad that she's being so level-headed about the whole thing and not angrily confronting him about where their relationship is going in Week Two of the Race (as we've seen so many other team do), but is instead sitting back and letting these thoughts percolate in her mind.

I have to say that I actually REALLY like country "bumpkins" David and Mary. I was a little concerned when I saw them introduced in last week's episode and a handy bottom-of-the-screen captioning would be real helpful when David speaks, but I've grown to love these two because of their spirit and their innate goodness. What other coalminer couple from the Deep South would be so open and accepting of other people and cultures (whether they be Asian or gay) than these two? They've completely embraced the spirit of the Amazing Race and I applaud them for it; they've expanded their comfort zone and have approached every person and challenge thus far with an openness and acceptance that I find truly refreshing. Hell, they might even be more accepting of Lauren than her own father, Duke.

Speaking of father-and-daughter team Duke and Lauren, they are growing on me, but I find his comments about Lauren's lesbianism a little disappointing. How can someone say that they are accepting of gays, but not when they're in their own family? Isn't that a little, you know, hypocritical?

Rob and Kimberly keep talking about whether or not they should take their relationship to the next level, but based on what I've seen here, I can honestly say that they should break up. Fast. While they're certainly no Jonathan and Victoria, their constant bickering and lack of supportiveness for one another don't really show any potential for a long-term relationship. Plus, Rob can't seem to realize that one must actually drive on the road to get to a destination. Let's just hope he doesn't do anything stupid like propose after winning a challenge...

But unfortunately it's Phil-iminaton time for one team as the cheerleaders--while they might have oodles of Spirit--can't follow directions very well, arriving at the road block well after all of the other teams. After Kellie spent several hours attempting to shoot a flaming arrow at a target 160 feet away (in the dark, no less), they finally agreed to just stop trying and checked in at the Pit Stop, only to discover that Phil was sorry to tell them that they'd be eliminated from the race. I can't say I was surprised as they seemed perpetually behind this leg but I'm sorry that I'll never get the chance to be able to distinguish between Kellie and Jamie. (Hint: Kellie was the blonde one.)

Next week on The Amazing Race: Duke and Lauren run out of money during a particularly expensive taxi ride, while the Beauty Queens and the, er, Queens face off after Dustin and Kandice cut the line at the airport. Ooooh, it is on.

It was the review that launched a thousand pieces of hate mail: my review of NBC's new superhero drama Heroes back in May. Tonight, the wait is over to see if producers have improved the show since I saw the original pilot... or if it's just as dull and messy as before. Talk back tomorrow.

I can't tell you why I like watching this traditional sitcom, but Julia Louis-Dreyfus is like a warm blanket of coziness after a long Monday. On tonight's episode ("The Answer is Maybe"), Christine accepts a date from a stranger (Scott Bakula). Be careful, Christine: he might just leap as things are getting good!

Season Two of Showtime's suburban-set pot dramedy is in full swing. On tonight's episode ("Must Find Toes"), Andy recovers from an accident at the grow house while Nancy is forced to contend with first crushes and failing grades from her sons.

I wasn't really all that crazy about the pilot, but I'll give the show a second chance and tune into the second episode ("The Cold Open") airing tonight on NBC. Matt and Danny are given five days to launch their first show while Jordan defends a rather controversial sketch.

Anonymous said…
Peter completely creeps me out. The fact that he keeps calling Sarah "sister" as in "Go for it sister!" is just bizarre. And he was so condescending when she started to get upset during the Detour. She does seem to be coming to her senses, though. Thank goodness.
9/25/2006

thekeez said…
Can you believe Phil actually asked Sarah how she felt about "being in the second leg of the race."

Anonymous said…
re: the keez - glad I am not the only twisted one. Actually Phil said, "You've made it two LEGS" at which point I turned to my friends and said, "Really, only one leg."

"Plus, their relationship seems to have no romantic dimension whatsoever" - that's cause he's GAY! He's the only one who doesn't know it yet. I don't like him at all.

I actually kind of like the beauty queens, conspicuousness aside.

Danielle C.F. Maris said…
I really like David and Mary too! They squabble a little but mostly they seem very open-minded and genuinely nice...which is a rarity in this race. I love how excited they are by everything and everyone. I don't think they'll be able to pull off a win but I hope they remain in the race for a good while!
9/26/2006