Stuck in the "Weeds": Welcome to Mrs. Botwin's Neighborhood 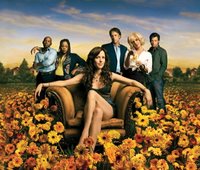 Just when you thought that things couldn't get any worse in Agrestic... they do. Well, at least for just about everyone other than poor Isabelly and a suddenly very happy Shane.

In last night's episode of Weeds ("Mrs. Botwin's Neighborhood"), Nancy (Mary Louise Parker) has to contend with attacks on the home front from a number of directions, the most upsetting of which is eldest son Silas' (Hunter Parrish), um, reaction to the news that pregnant girlfriend Megan (Shoshannah Stern) won't be keeping their child after all. While Silas keeps texting her with thousands of potential baby names, Megan has shut herself in her bedroom and her father is none to pleased with Silas when he attempts to try and see her. (Nor should he be when Silas breaks through Megan's bedroom window and stabs--yes, STABS--Megan's dad with a piece of broken glass.

Nancy's reaction to the entire bloody scene is a classic momma bear action; she gets right up in to the guy's face and pushes him (by the head no less) and says that if he comes anywhere near Silas, she'll kill him. Nancy's angry and she means business, no if, ands, or buts about it. The scene completely showcases Mary Louise Parker's skills as well; Nancy can shift from tender to combative in a few short seconds and it's her body language and posture that belie her strength and rage more than any lines of dialogue. You do not want to mess with this momma.

But some people aren't as intimidated by Nancy as she might like them to be. People like, say, the Armenian mafia who already have installed five grow houses on the block where Mrs. Botwin and the Gang have set up their latest enterprise. This being Weeds, however, the competition doesn't welcome you to the neighborhood with slashed tires or broken windows... rather they bring over threatening... pastries? This is suburbia, after all, and what says get off my turf more than some free carbohydrate-leaden baked goods? Fortunately, Nancy's ace up her sleeve--that would be her secret new husband Peter (Martin Donovan) who just happens to be a DEA agent--gives her the best wedding present that any suburban mom-turned-pot dealer could ask for: the elimination of any competition. Lucky for Nancy that her hubby is willing to play her game, for now anyway. But I am still waiting for the inevitable confrontation when Silas and Shane realize that Mommy's remarried without bothering to tell either of them. I smell fire...

The youngest members of the Agrestic community seem to be the only ones who aren't drowning their sorrows right now. Isabelle (Allie Grant) auditions to be a plus-size model for a children's clothing line called (seriously) Huskeroo, much to the horror of Celia (Elizabeth Perkins) who has to contend with the shame of everyone knowing that Isabelle is (gasp!) fat. Meanwhile, Andy (Justin Kirk) takes Shane (Alexander Gould) to a massage parlor for a happy ending after Shane discovers he's the only member of his class (what is he, 11?) that, um, isn't up on the latest mating rituals of the pre-teen set.

The showdown between Andy and Shane's principal is another priceless comedic gem and Justin Kirk is quickly becoming a major reason to tune in to the show. If the series' producers aren't careful, he might just steal the show away from MLP altogether. As it is right now, he's certainly cornered the market on the majority of the zingers in each episode...

But for me, I'm hoping things lighten up a little bit in Agrestic. All of this doom and gloom can certainly ruin your buzz and I'd like a little more levity with my mafia-delivered pastries and spousal DEA busts.

The whimsical new sci-fi drama that's more Northern Exposure than Stargate. On tonight's episode ("Primal"), Fargo invents a mental mouse that links the human brain to a computer, but somehow winds up interacting with Taggart's healing nanoids. Just another day in Eureka then...

Because I can never pass up watching this comedy classic for the umpteenth time...

Anonymous said…
Ah, Fish Called Wanda. The only movie to actually make me fall out of my seat laughing. I could watch it over and over, too.

See, the problem w/Isabelle and the Huskaroos story is, well, the actress grew a little in the off-season and really isn't that husky anymore. Her face is roundish, but really, she lost a lot of last year's baby fat...
9/12/2006

Anonymous said…
I laughed so hard last night when Andy and Sanjay thought they were getting busted and Andy dove through the tarp to get to the mother plant. Justin Kirk is comedic genius!
9/12/2006