Ryan Murphy and Brad Pitt to Wrangle "4 oz." for FX 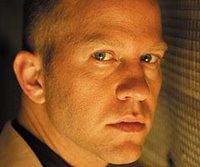 Nip/Tuck creator Ryan Murphy and producer Brad Pitt have sold a new drama, 4 oz., to cabler FX that will chart the ongoing metamorphosis of a married sportswriter and father of teenage sons who decides that he wants to live his life as a woman.

According to Murphy, the series will have a natural five-season arc for the series that will also focus on the married transsexual's teenage sons. Says Murphy: "The first season deals with the revelation of his secret. In the second season, he begins dressing like a woman. The third covers the surgery, and his inherent doubts about going through with it, and by the fourth season, he's living as a woman and attempting to find love."

And in case you couldn't figure out that wacky title, the measurement refers to the average weight of a penis, according to Murphy. Hmmm, given the surgical subject matter, think there's any possibility for a crossover with the gang at McNamara/Troy?