Observing the Others: The "Lost" Season Three Premiere Trailer 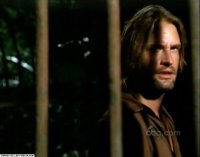 Was it just me or did the preview for next week's third season premiere of Lost ("A Tale of Two Cities") give you goosebumps?

I wasn't going to watch the umpteenth recap special for Lost last night ("A Tale of Survival"), I really wasn't. TiVo knew to record it and I had a feeling it would sit there, taunting me from the hard drive, for the next week. But I ended up coming home from work after a way too long (and far too stressful) day, popped on America's Next Top Model for some mindless comfort, and the next thing I knew I had been sucked into yet another recap episode.

First, can I just say that Michael Emerson--whether or not he appears on screen is immaterial--scares the bejesus out of me? His narration last night was haunting and melodic and completely in fitting with the series. But was anyone else surprised that Boone and Shannon (hell, and Libby) failed to make the cut and appear in the linear-style retelling of the past two seasons of Lost? While they don't exactly fit into the larger-picture storytelling of "A Tale of Survival," I did wish we could have caught a glimpse of them. They're much missed in my household.

But onto the real reason I stuck around watching an hour of plots I already know intimately: the trailer for next week's season premiere. Set your TiVos, cancel your plans, put the kids to bed, and take the phone off the hook, gentle readers. I know I will be. It's been a long, hot summer and I've had serious Lost withdrawal.

So what did we glean from the spare seconds they showed us? Let's recap. We see Sawyer locked behind bars, Kate crying (outside), and Jack in a Hannibal Lecter-style reinforced plexiglass cell with his captors telling him via loudspeaker that they know exactly who he is. Jack doesn't much like the fact that "Clarice" is taunting him and screams, "Tell me where my friends are!" He then attempts to make a bid for a Flip This Cell special by yanking on a chain dangling from the ceiling of his cell in an attempt to escape. Next up: flashes of Jin and Sayid firing guns, Locke running through the jungle, Jack attacking an Other, Hurley looking bewildered, and Kate outside again, surrounded by people (Others, I presume?). Finally, after the catch phrase "Plan Your Escape," Jack turns a wheeled door release, only to encounter ... a wall of water rushing in.

I don't know about you, but the next seven days can't pass quickly enough for me.

Anonymous said…
"They know exactly who he is"

You know, in one of those Rachel Blake videos, there's a doctor seen from the back with an awfully familiar sounding voice.
9/28/2006