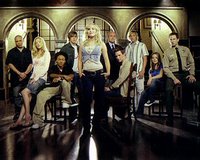 I couldn't help but sneak a break at work today to take a little peek at the third season premiere of perennial Televisionary fave, Veronica Mars, courtesy of MSN and Veronica's new home on the CW. While I'll wait to discuss the actual episode until after its broadcast on Tuesday night, you can preview the episode ("Welcome Wagon") in its entirety here. (But don't forget that we want to keep Veronica Mars' broadcast numbers up, especially in the first week, so if you do watch it online, be sure to tune in to the actual broadcast as well.)

But as we're not talking about the episode itself, can I just share with you how completely fixated on the series' new opening credit sequence I am? How very out with the old and in with the new. It's only fitting that our girl, now off to university, should get a makeover as dynamic and funky as she is. Because, let's be honest, the old sequence's notebook paper motif wouldn't work as well outside Neptune High. I absolutely love the Dandy Warhols' new version of "We Used to Be Friends" (iTunes search, anyone?) and the brilliant use of alternating vertical lines, contrasting sharply against the shots' noir settings.

It's gorgeous and sleek, while still true to the essence of the show... Plus, Tina Majorino! Michael Muhney! New faces Julie Gonzalo and Chris Lowell! The only thing that would have made me happier would be to see Michael Cera's and Alia Shawkat's names in there too. (A boy can dream.)

While I am beyond thrilled to see Mac (Tina Majorino) appear in the credits as a fully billed member of the cast, I feel like she looks so sullen sitting there in the diner. But, then again, you would too if your boyfriend turned out to be a psychotic mass murderer who blew up a bus filled with high schoolers, framed the pedophile mayor of Neptune, and then after refusing to sleep with you, stole all of your clothes, left you stranded in a hotel room, and then tried to kill your crime-fighting pal, before taking a dive off the roof of the Neptune Grand. Well, wouldn't you?

I think that's what the college kids are calling irony these days ...

Anonymous said…
Well, I am going to wait til Tuesday to watch the ep (especially since my good friend who just finished watching season 2 gets into town that night and we are excited to watch together), but thanks for the opening credits tip! I always fast-forward through the credits, so I will know to watch! I can't wait!
9/29/2006

Danielle C.F. Maris said…
I was worried when I heard that they'd changed the opening credits. But I love, love, love the new take...the noir images, the new version of the Dandy Warhols song, the fact that Tina Majorino is now in the credits...all fabulous. I can't wait for the season premiere!
9/29/2006