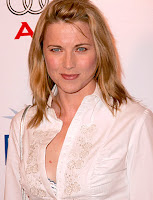 ABC's drama pilot Football Wives has added another bad-ass babe to its team, following the casting of Gabrielle Union (Bring It On, Night Stalker) as the famously named Chardonnay.

This time round, it's the former star of Xena: Warrior Princess herself, Lucy Lawless, who has signed on to star in the drama pilot. She'll play the pivotal character of Tanya, who in the original Brit series was the malicious, catty wife of resident bad boy Jason.

I'm hoping that the casting doesn't mean that we'll never ever see D'Anna, Lawless' character on Battlestar Galactica, again. When last we saw her the poor Cylon was placed into cold storage and her memories shelved (despite finally seeing the face of one of the final five Cylon models). I was hoping that somehow, someway, we'd get to see my favorite Cylon, misguided D'Anna, one last time. (And we still might, somewhere down the line.)

On a somewhat unrelated note, did anyone else feel that last night's episode of BSG ("The Woman King") was quite possibly one of the weakest, not just of the season, but of the series to date? I'm not quite sure what happened there, but after getting pre-empted last week (due to the Superbowl), I was hoping that the series would return with a bravura episode. Instead, we're "treated" to a Katrina-metaphor and some Bruce Davison scenery chewing while Helo is forced to take accountability for his many (nearly treasonous) actions. And can anyone explain to me the meaning behind the episode's title?

Ha, wow. I'm glad my wife and I aren't the only ones. The ep's beginning was one big "WTF?" Why are they loading refugees onto BSG? Why's this civilian doctor there? Why's Helo in charge of it? (Did Adama demote him from XO just because Tigh wandered back onto the bridge?)

P.S. Mr. Moore, please tear down the bar set. BSG deserves better than to be one of the countless shows that can't think of a better place than a bar for their characters to congregate. Every time we go to the bar set, I think, "Oh look, it's Shooters. Or maybe the Regal Beagle."
2/12/2007

Anonymous said…
"The Woman King" was the woman named King whose son was murdered by Dr. Whosits. Best to forget the whole thing. You're right, as always. It sucked. Only Helo shirtless was notable.
2/12/2007

Danielle C.F. Maris said…
Where oh where did the refugees come from? I kept thinking I was missing something. Apparently not.

Allison said…
A great place to figure out what Ron Moore is thinking is to listen to his podcast. It gives great insight into plot and story construction, direction - everything.

Gotta agree with with Stefan. Even after to hearing Moore talk about the bar - it's terrible. It's not interesting or compelling. A rare miss.
2/13/2007