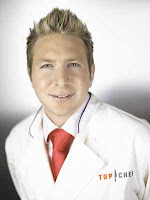 Marcel's not the only former Top Chef villain making the news these days. Looks like Top Chef Season One's resident scoundrel, Stephen Asprinio, is popping up again, but for a more worthy reason than, say, getting hit over the head with a bottle by an irate viewer.

According to site Slashfood (via LA essential foodie site Eater LA), Asprinio, best known for his coiffed hair and styled suits (along with ubiquitous wine pairings) will open a wine shop called Tastevin in downtown LA later this year. Slashfood has the scoop:

A wine boutique aimed at 20-somethings who are increasingly developing a taste for wines, but are put off from seeking out high-quality ones by the old fashioned, pretentious way wine is usually presented. Corks, dusty bottles and wooden crates are not selling points to the under-30 crowd. Stephen is doing away with all the stuffy formality of wine buying and keeping his venture sexy and ultra-modern, with Philippe Starke furniture and beautiful displays of the bottles, appealing to his age group by improving the presentation and accessibility of one of his favorite things: wine.

Every wine offered in the shop will be available "on tap" using a sophisticated computerized wine tasting system allowing shoppers to taste up to three wines before they buy them. Additionally, museum-style "audio wands" will provide descriptions of each of the wines.

Asprinio hopes that Tastevin will become a franchise, but in the meantime he also has a Tuscan restaurant, Forte d'Asprinio, planned for Palm Beach County, Florida, which will open this summer.

No word if Top Chef Season 1 host Katie Lee Joel will get a discount at either of Asprinio's empire outposts.

Danielle C.F. Maris said…
I certainly wasn't a Stephen fan but he does have talent and obviously a passion for wine so I think this could be a good deal. I will definitely check it out.
2/14/2007