"A Miserable Thing, This Race:" Rob and Amber Maintain Their Lead on "The Amazing Race" 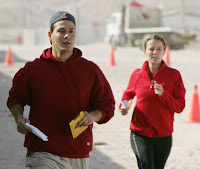 It's funny how the smallest thing--a slow cab driver, a missed connection, a delayed flight--can radically alter the outcome of the game. And sometimes, on The Amazing Race, those things don't mean a lick of difference whatsoever.

Just take a look at Rob and Amber and Danny and Oswald on last night's episode of The Amazing Race. Even with a delayed flight that put the two leading teams all the way behind every single other team on the Race, they still managed to finish first and second, respectively. And there were no equalizers.

So just how did they do it? Pluck, determination, and grit, I guess. It also helped that they seem to be a hell of a lot more detail-oriented than the other teams. Racers left Cotopaxi National Park (well, most of them did: Mirna and Charla had to be towed by David and Mary) and made their way to Santiago, Chile. Rob and Amber and Danny and Oswald managed to get earlier flights but, thanks to delays, they ended up landing in Santiago after everyone else (the agents at the gate wouldn't let the teams board the flight with the others).

Drew was immediately beginning to rub me the wrong way. I loved the big lummox on TAR Season One, but you can just tell his heart isn't in the game this time, injuries or not. After seeing David put his and Mary's bags in the front of the plane (in first class), he took them down, saying that he should be putting his bags by his seat. David was none too pleased and said that if that's how they wanted to play the game, so be it. (Still, seeing is believing that Team Kentucky will ever play dirty.)

Arriving in Santiago, teams made their way to the Codelco Building, where they encountered the first roadblock of the season. In this Roadblock, one team member would make their way into a boardroom filled with businessmen (apparently late-night businessmen as it's now the middle of the night) and search the room for letters of the alphabet that were hidden throughout the room (on a piece of paper, on a pen, a tie, etc.) Teams would then have to unscramble the letters (omitting several) to match it to a destination inscribed on ten different photographs of locations around the room. While Dustin figured this out quickly, the other teams were stumped, especially Eric who spent longer than anyone else trying to figure out the puzzle, even AFTER he was told that the missing H he was so desperate to find was on a pen. (Not sure why Amber told him that, to be honest.)

(Aside: Strangely, it's Eric who's irking me more than Rob, who seems to have calmed down a little bit between installments of The Amazing Race. Scary, but true. So far, he's managed to play smartly without playing as dirty as he normally does. Well, except for asking the travel agent to not tell the other teams about the earlier flight, but really that's so childish, it's sweet.)

Rob and Amber and Danny and Oswald arrived at the Roadblock last, yet finished quickly and took off. Dustin and Kandice were in the lead, but several other teams were close behind them. They all headed to Chuquicamata copper mine, where they found a Detour. In By Machine, each team member had to operate a huge front loader to move enough gravel to cover a marker; in By Hand, teams had to secure a two-ton tire to a dump truck using bolts and washers. I'm not entirely sure why Rob and Amber and the Guidos were the only teams to choose By Machine as it seemed super-easy and took no time at all. The Beauty Queens lost their lead and drifted towards the back of the pack. David and Mary didn't bother paying attention to the details of the task and had to start over. Charla and Mirna wasted valuable time squabbling over a step-stool. (How else was she going to help, Mirna?)

Teri and Ian, in a hilarious twist, failed to notice the marked cars nearby and had someone drive them to the entrance of the mine, where (surprise!) there was nothing there either. I was really hoping that they would fail to see Dustin and Kandice sprinting past them to the marked trucks (damn), as I really, really, really dislike Teri and Ian.

Afterwards, teams had to make their way to the Valley of the Moon, a shifting landscape that required that they drive no faster than 40 kph (thanks to those shifting sands and hairpin turns), and then onwards to the Valley of the Dead, where they would be allowed to increase their speed to 50 kph (not that Drew noticed this). Rob and Amber checked in first (winning a pair of off-road motorcyles), followed closely by Danny and Oswald in second place.

Was it just me or did Mirna come off like a raving lunatic when she was haggling on the side of the road with the cab driver? Mirna and Charla were following a cab driver and they, in turn, were being followed by the Beauty Queens. Both teams pulled off the road and Mirna wanted Dustin and Kandice to fork over half of the exorbitant fee Mirna was paying the cabbie. The Beauty Queens didn't want to go along with the idea and hesitated, at which time Charla started in on them. ("Just chill out," they suggested to her.) Mirna began to have a fit and demanded they leave and then had a meltdown at the cabbie and kept trying to give him everything she owned ("What do you want from me?") or $20. I'm not sure which. Regardless, nearly every other team passed them while they argued. So, some good strategizing there, guys. Just brilliant. (And what was with the plastic surgery comment?)

Kevin and Drew blew their lead over the other teams by failing to realize that they could increase their speed to 50 kph once they exited the Valley of the Moon. Everyone passed them and Team Kentucky was shocked (shocked, I tell you!) when Charla and Mirna passed them. Mary in particular was furious at this turn of events (um, what did you expect, another six-pack alliance?) and couldn't believe their "friends" would do this to them.

Ultimately, everyone managed to check in before Kevin and Drew. But even before Phil could tell them that they were eliminated from the Race, Drew tries to walk off, not once, but twice, as Phil and Kevin had to drag him back to the mat. It's obvious that, regardless of any injuries or exhaustion (Drew needed to be treated with oxygen four times for altitude sickness at the last pit stop), Drew just did not want to be on the Race this time around. Which is sad, because I think they really should have been eliminated last week (and kept John Vito and Jill in the game). Sigh. Ah well.

Next week on The Amazing Race: Teri and Ian face off with Charla and Mirna at an airport ticket counter, while Danielle is, um, attacked by a fish during a Roadblock. Classic.

On tonight's episode ("Everybody Hates Chain Snatching"), Chris must come up with a replacement necklace when he foils Malvo's plan to steal Vanessa's gold chain. How does he get himself into these situations?

It's Day Six of 24. While FOX doesn't give us much in the way of previews, here's what we do know: Palmer unexpectedly brings together two unlikely allies, Jack has a rendezvous with former President Logan, and CTU is forced to deal with an "unexpected weakness."

Anonymous said…
Oh yeah - Mirna came off as a total whacko, and exhibited all the reasons why I never liked her.

I loved how Mary walked into the roadblock room and immediately wrote down all the picture names - found a Q and booked out of there. Awesome! If only there were more puzzle-type things on the race.

Seriously, I really wish K&D had given up last week, so JV and Jill could still be there. It's just not right. Drew's heart was so not in it.

Anonymous said…
I loved that both Mary and Dustin finished the road block effortlessly while Eric may as well have spent the time banging his head against the wall. I definitely agree that he is more irritating than Rob this season. I cannot wait for next week when Danielle gets hysterical over a fish. Classic.
2/26/2007

Danielle C.F. Maris said…
I am so glad that Kevin and Drew are gone. It's sad because I really liked them the first season but it was so obvious that they did not want to be in the race this time around (well, Drew at least). It's just lame that they took a spot away from another team that could have appreciated it more.
2/26/2007