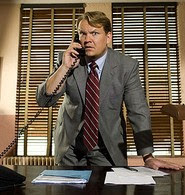 After weeks of speculation, NBC has finally released firm launch dates for its midseason series, The Black Donnellys and Andy Barker, P.I.

It was widely anticipated that The Black Donnellys, a crime drama about four Irish-American brothers involved with organized crime (from Crash creators Paul Haggis and Bobby Moresco), would take over the Monday nights at 10 pm timeslot from struggling freshman series Studio 60 on the Sunset Strip, beginning March 5th. (That said, not coincidentally, it's the night Heroes wraps up its next batch of episodes, providing Donnellys with a rather cushy launch pad.)

NBC has not said how many weeks Donnellys will, er, "help out" Studio 60, though it did order 13 eps; how long Donnellys remains will have much to do with the performance of the newbie series, though after its initial broadcast, it won't have new episodes of Heroes as a lead-in.

Meanwhile, the Peacock also finally revealed an airdate and timeslot for freshman comedy Andy Barker P.I., starring Andy Richter (of the still very much missed Andy Richter Controls the Universe), but it's not one that made this TV watcher very happy.

30 Rock, which aired its most hilarious episode yet last week ("Black Tie"), will take a bit of a breather when Andy Barker takes over its timeslot on March 15th. After Barker airs its six episode order (including an ep penned by Jane Espenson), 30 Rock will rejoin the schedule on April 19th.

Having seen the pilot for Andy Barker last May (and been way too disappointed despite the presence of Richter and Arrested Development's Tony Hale), I can't say that I have the highest hopes for the series In the meantime, I don't know what I'll do with my impending 30 Rock withdrawal as it's become a crucial part of my Thursday night routine and made me almost forget how bad My Name is Earl has become this season. Almost.

Anonymous said…
Tragic news indeed. Funny, if you had told me last summer that I'd be more upset about NBC pulling 30 Rock from the schedule than Studio 60, I'd have had you committed.
2/05/2007

Rich said…
It truly is sad news that 30 Rock will be going on a break. That show has only gotten better with each episode and I completely agree that last week's episode was the best. Some of those storylines came out of nowhere (the prince and his size/shape) and were great!
2/06/2007