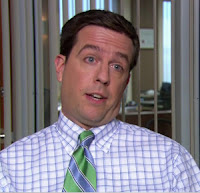 Can I admit something here? I feel a little conflicted about something.

On the one hand, I trust in The Office and its top-notch writing staff implicitly and know that they'd never do anything to intentionally harm the series. But I'll admit that I'm a little wary of their latest move.

For those not up to speed, Ed Helms has been upped to a series regular on The Office; he's been recurring this season as the obnoxious, camera-mugging Andy Bernard, who came to Dunder-Mifflin Scranton from the Stamford branch which, as we all know, merged with their paper manufacturing brothers a few months back. Of the transferees, only Andy and Karen (Rashida Jones) remain.

Karen will continue as a recurring character on the series, while Andy... well, Andy just became one of the full-time characters on the show. While I've loved having Helms around this season, I do feel that the writers have sort of fulfilled the story arc they set out to create for poor rage-prone Andy. After he punched a hole in the wall during a Defcon 5 freak out (after usurping Dwight's position), Andy's story seemed to reach its conclusion.

However, the online producer's cut version of "The Return" (available at iTunes) told a different story. A tag, featured only on the extended producer's cut, revealed that Andy would be sent to an anger management seminar and would someday return to Dunder-Mifflin.

Guess what? Andy is not only returning to Scranton, it seems like he'll be a permanent fixture. I'm a little apprehensive about this move. Andy worked in small doses. He was someone more sycophantic than Dwight, more irritating than Michael. He made Jim even reevaluate his relationship with nemesis Dwight. And perhaps he managed to humanize all of them a little more in the end. Or at least sharpen some of their rougher edges.

But I am not sure quite how he'll fit into the larger Dunder-Mifflin picture as a full-timer. He certainly gives Michael a run for his money in the crazy department, but I do miss that sort of reptilian, Machiavellian, er, wit that he displayed rather than the basketcase he seemed to become in recent weeks. I'm hoping that his time in anger management (I love the fact that he's making more out of the "management" part of that equation than the anger issue) makes him calm down a little bit.

After all, I'm quite happy with the way things are at Dunder-Mifflin right now and I'd hate to see Angela or Phyllis or Stanley (or any of them) pushed into the shadows at the expense of a new character who happens to stand out a little more, in his own inimitable way. Fingers crossed that that doesn't happen.

In the meantime, look for Andy Bernard (and Ed Helms) to turn up back at The Office by the end of February sweeps.

Anonymous said…
I'll keep an open mind about this. I love Ed Helms but agree that the Andy arc came to a satisfying conclusion and am not sure how he'll fit in as a full time cast member. Hopefully, it will work out for the better!
2/01/2007

Anonymous said…
I like Andy on the show. He shakes things up a bit for all of the characters and that's what THE OFFICE needs every now and again. There's only so much mopey Pam that one person can take.
2/02/2007

Neil said…
I love andy. He was actually becoming
one of my favorite characters.
3/05/2007