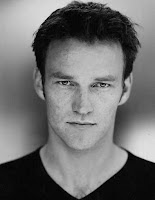 Moyer will play the 166-year-old enigmatic vampire Bill Compton, opposite Anna Paquin, who plays telepathic waitress Sookie Stackhouse in the drama created by Six Feet Under's Alan Ball, who wrote and will direct the HBO pilot, which is based on Charlaine Harris' Southern Vampire book series.

Moyer, of course, was cast earlier this season in FOX drama pilot NSA Innocent, which has since be refashioned as Company Man. Moyer's role was recently rewritten and the part recast, with Jason Behr now starring.

It was only a matter of time before some other production snatched Moyer (NY-LON) in a season where British actors seem to be all the rage. The casting isn't Moyer's first US casting gig; he recently starred in USA's limited series The Starter Wife.

Anonymous said…
Speaking of British actors -- would be nice to see Joseph Mawle in a U.S. series.

Anonymous said…
Perfect for the part? Bill Compton is not British, and he is a lot more....substantial than this guy appears to be.
5/09/2007

Anonymous said…
I agree I don't think this guy looks enough like how I pictured Bill. Hopefully 'Eric' will be cast with someone much more fitting. Whoever gets the role of Eric Northman has big shoes to fill! By the way! The last book just came out! Loved it!
5/24/2007