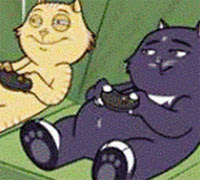 Fans of BBC's Hyperdrive or Channel 4's Black Books might just want to make their way down to the ABC Family booth at Comic Con.

So what does this series have to do with Black Books and Hyperdrive? I'm glad you asked. Creators Kevin Cecil and Andy Riley, who created the BBC2 comedy Hyperdrive (starring Sean of the Dead and Hot Fuzz's Nick Frost) and wrote several episodes of the hysterically surreal Black Books--including one of my personal favorite episodes "Manny Come Home," which guest starred Simon Pegg--just happen to be the creators of Slacker Cats, which launches August 13th on ABC Family.

They'll be at the ABC Family booth this Friday between 3-4 pm, so if you happen to be a fan of either (or both) of those series, please stop by the booth and say hullo to Andy and Kevin. Tell 'em Jace at Televisionary sent you.

Anonymous said…
I LOVE that episode of Black Books. And I love hyperdrive too. They are definitely talented comedic writers! Unfortunately, I can't make it to Comic-Con but I look forward to seeing their new show.
7/24/2007