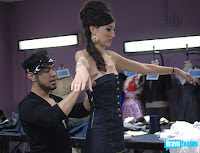 Is it just me or are you just flat out confused as to why tear-prone Ricky is still in this competition... and how he managed to walk away with the top spot on last night's episode of Project Runway ("Even Designers Get the Blues")?

I had a feeling that last night's editing was setting up a win for the former lingerie designer. Call it "The One with the Waterworks," if you will. It must have been a record for Ricky, who broke into tears on three separate occasions last night during a challenge in which the designers were tasked with creating an iconic piece out of Levi's brand jeans.

Was Ricky's lingerie-inspired dress good-looking? Yes, for a change; it was also well-constructed, which was also a bit of a departure for Ricky. But I thought the dress, essentially a ruffled piece of lingerie in denim, paled in comparison to Christian's iconic design, which reinterpreted the classic jean jacket and, well, jeans in a fashion-forward and unexpected way and he gets major points for (A) being the only designer to attempt to create a brand-new pair of jeans and (B) using jacket sleeves in order to do so. It was modern, hip, and definitely iconic. So why didn't it win?

Ricky's design definitely fit his model--styled up to look like Amy Winehouse--like a glove, but I didn't think there was anything particularly iconic about the design. It worked, it looked good, but it was yet another corset (albeit with buttons!) from a designer who has given us a lot of corsets this season. Im fact, it looked rather like a Guess dress from the '90s.

As much as I loved Christian's design this week, the designer himself was driving me up the wall with his continually catty comments and air of self-entitlement. While I normally find his attitude amusing, it turned caustic last night as he could not keep his mouth shut about anyone or anything, least of all "deconstruction" which he claimed to have mastered in "the first grade." He's become a cartoon with a Cubist hairstyle.

But at least when Christian doesn't approve of the challenge (remember the prom dress incident and the Hershey's challenge?), he still rises to the occasion to nail an ensemble. Even when he feels himself above a particular task, he still managed to create a memorable look... unlike Victorya who fades into the background. So it was no surprise that V. would do just that with this challenge, turning in a trenchcoat that was staid, boring, and unimaginative... and, yes, did look like a jean jacket with a skirt glued on for good measure. Ick. It was no surprise that she would be up for elimination but I had no idea that the bottom two would wind up being Jillian and Victorya!

Jillian--who also presented a trenchcoat (surprise!)--once again bit off more than she could chew, struggling against the time constraints and creating a garment that she was doomed to fail in just the ten hours allotted. The finished product was confused and just... odd, a pale blue, ruffled trench with an oversized collar that did not flatter her model in the least.

I was, however, really impressed with Rami's design, which was a major departure from his draped jersey aesthetic. He turned in a sleek, sophisticated dress that incorporated the jeans' zippers in unexpected ways and was definitely fashion-forward and inventive. Rami, you've redeemed yourself in my eyes after last week's debacle.

As for Sweet P, I do not understand why the judges were heaping so much praise on her design, which started off as a denim wedding dress (!) and then evolved into a shorter, less "hippie dippy" patchwork dress. While the judges oohed and ahhed over the garment, I was baffled: here was a dress that looked off-the-rack from Target that could not have been "dressed up or down" (as Nina alleged); to me, it looked cheap and not at all iconic. (Wasn't that the entire point of the assignment?)

Sigh. Poor Chris. It was a good idea to try to reinterpret the little black dress into a denim icon, but the little black dress exists for a reason: it can be worn by anyone, anywhere, at any time. It's fluid and flexible, flattering and fierce, all in one timeless package. Chris' design definitely seemed dated and failed to capture any of the iconic quality of the original or to use the denim in some unexpected way. Plus, I agree with the judges about the fraying. It was either too much or too little, but as it was, it was all wrong.

In two weeks on Project Runway, the designers get a clue about a mysterious field trip behind a closed door, Sweet P and Christian arm-wrestle, Chris looks baffled, and Michael Kors "feels like the Pope at a sex club." No idea what the challenge is, but I can't wait!

I really liked SP's dress and thought she or Christian definitely should have won. Her dress fit beautifully, and I liked it aesthetically.

I was sure chris was going home, again, and was shocked when he was given the "you're in" before Jillian and Victorya. I was thrilled when it ended up being Vic.
1/24/2008

Anonymous said…
Have to say that I also hated Sweet P's design. I loathe patchwork and thought it had a definite "back yard BBQ" vibe to it.

As for Ricky, this was by far his best piece. But that's not saying much. The dress was decent but I thought that Rami's, which was similar, was much more successful and interesting.

I was sad to see Victorya go over someone like Ricky. She has serious talent but also serious attitude when it came to challenges she didn't like. She just needed to suck it up and do something fabulous regardless of whether or not she "approved" of the challenge.
1/24/2008

Brian said…
Ricky must be sleeping with one of the producers. This is ridiculous. Rami's dress was similar to Ricky's but far more sophisticated, intelligent, and interesting. Ricky shouldn't even have been in this episode in the first place; he should have gone home before Kevin and Kit did.

Victorya was certainly better than Ricky overall, but I found her attitude to be grating and I didn't see her in the top three at the end anyway, so whatever.
1/24/2008

Giulie Speziani said…
At a drop of a safety pin, Ricky would cry. If he wins or loses a challenge, I can bet on the winning horse that tears would stream down his face.
As for Christian, I did think he deserved the top prize. There were two pieces and very fashion forward.
But for the next episode, I think it has to do with gym clothes (blech) or wrestling outfits. Wouldn't it be funny if they had a challenge to dress up ice skaters for the Winter Olympics? Then my vote would go to the witty under dog, Chris March. ("Ah, youth...")
1/24/2008