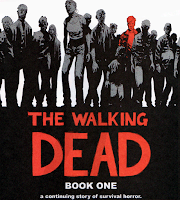 AMC is reportedly close to signing a deal with Frank Darabont (The Green Mile) to write and direct an adaptation of Robert Kirkman's comic series "The Walking Dead" for the cabler. Potential series, about a group of people who have survived a zombie apocalypse who search for a safe place to call their home, will be executive produced by Gale Anne Hurd and David Alpert. No studio is currently attached. "This is not about zombies popping out of closets," said AMC's SVP of programming Joel Stillerman. "This is a story about survival, and the dynamics of what happens when a group is forced to survive under these circumstances. The world is portrayed in a smart, sophisticated way." (Variety)

The Chicago Tribune's Maureen Ryan has a fantastic, insightful, and lengthy interview with Mad Men star Jon Hamm, in which he talks about Season Three of the AMC period drama. "What I think is important to understand about Don is that this guy is pretty significantly damaged goods," said Hamm about his character, Don Draper. "You know, [he had] an unbelievably bad family upbringing, very little education. Completely surviving on his wiles, his street smarts, whatever, and kind of manipulating people -- that’s the bad spin... So he’s kind of, in blunt terms, he’s [expletived] up. And that comes out in his dealings with people that try to get close to him. So this is not a guy who’s big on being vulnerable. And that is a big part of loving relationships -- being comfortable enough to be vulnerable. And I think that this guy might not have the capacity for that. He might. But it’s going to take a lot more work than he seems to be willing to give and I think that’s where he keeps running up against the wall with Betty.'I’m going to give you this much, and if you want more than that, I’m not going to do it.' And that’s where a lot of his bad behavior, comes out. Because the new girl doesn’t ask for that. They just want [Don] to be handsome, charming and exciting and new. So, when all that comes back on top of him, at the end of Season 2, he realizes that, as he says in his letter, 'I know that if I lose you, you’ll find somebody else, but I’ll be alone.'" (The Chicago Tribune's The Watcher)

CBS has given a pilot script order to a US version of British crime drama series Wire in the Blood and has brought on board Ildy Modrovich (CSI: Miami) to write the pilot script and Terry McDonough (Breaking Bad) to direct. Original series starred Robson Green as a clinical psychologist who teamed up with a female police detective to solve brutal murders. Project will be produced via CBS Television Studios and DreamWorks. (The Wrap)

Ernie Hudson (Oz) has joined the cast of NBC's Heroes in a recurring role next season, where he will play Baltimore detective Captain Lubbock who is attempting to track down his quarry, as yet unrevealed. (Hollywood Reporter)

Scott Foley (The Unit) will guest star in an upcoming episode of NBC's Law & Order: Special Victims Unit this fall, where he will appear in the season's fourth episode as a real estate agent enmeshed in a murder investigation. “I’ve been a fan of the show for a long time,” Foley told Entertainment Weekly's Michael Ausiello. “And the character was fully developed with addictions and problems both personally and professionally. Plus... it’s SVU, come on!” (Entertainment Weekly's Ausiello Files)

America's Next Top Model runner-up Yaya Dacosta has been cast on ABC's Ugly Betty, where she will play Wilhelmina's unruly daughter Nico next season. Dacosta replaces Jowharah Jones, who originated the character in Season One of the ABC dramedy. According to Entertainment Weekly's Michael Ausiello, Nico "resurfaces in the Oct. 9 season premiere and promptly gets caught up in one of the show’s new mysteries." (Entertainment Weekly's Ausiello Files)

Courtesy of co-creator Sam Bain, Broadcast has an exclusive behind-the-scenes look at the upcoming sixth season of British comedy Peep Show via a series of candid photographs taken on the set by Bain. (Broadcast)

Kath & Kim creators/stars Gina Riley and Jane Turner are said to be in talks with Australia's Channel 7 about a fifth season of their series Kath & Kim... or a spin-off starring their characters Prue and Trude, described as "toffy-nosed shop assistants" as they live a life of luxury among the world's best hotels "while battling the harsh economic climate." (Broadcast)

Jay Leno has been cleared of a charges of violating WGA's strike regulations during the 100-day writers strike. (Variety)

Bella Spruce said…
Thanks for the info on the Jon Hamm interview. He is truly insightful about Don Draper.

In fact, he so embodies the character that it makes me feel funny when I see him in another role (like 30 Rock) or see real life pictures of him. If his hair isn't perfectly shellacked or if he isn't wearing a suit it just seems wrong somehow.
8/12/2009