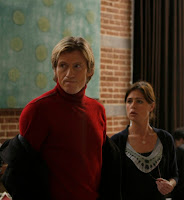 TVGuide.com is reporting that FX drama Rescue Me will wrap up its series run in 2011, according to co-creator/executive producer Peter Tolan.

"Within the next couple of weeks, we're going to begin shooting the last 19 episodes, which will be the final two seasons of the show," Peter Tolan told TVGuide.com, with the final episodes of the Sony Pictures Television-produced series slated to air in September of 2011 in order to commemorate the tenth anniversary of 9/11. Those episodes will be broken down into two seasons, with the first batch airing next year.

"I think they're stretching the airing of it out until the 10th anniversary," surmised Tolan. "So if you put 10 episodes on next year and nine the following year, you'll land there."

Rescue Me will end its fifth season on Tuesday, September 1st at 10 pm ET/PT on FX.

Tara said…
I love that they want to bring Maura back for a few episodes at the end. Her character's way too interesting to just fade away after next week's finale and Maura's done phenomenal work in the role, it'll be a treat to have her back.
8/28/2009

rockauteur said…
Feel like Rescue Me sort of wasted Maura's character... it's been a bit of a slow burn and I feel no connection to her really, especially since you really want Tommy to end up with Janet or Sheila.