Doves, Bio-Luminescence, and Fire Squirrels: Love in the Air on the Season Finale of ABC's "Better Off Ted" 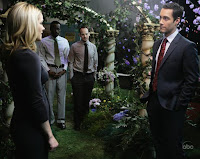 Despite this being the second "season finale" for the comedy series' first season in the last few months, I'm sad that we'll have to be without the gang at Veridian Dynamics for the next few months... until the Victor Fresco-created series returns with its second season in November.

Last night's back-to-back episodes of Better Off Ted made the separation even more painful. Despite the lack of Will Arnett as lousy magician GOB Bluth (we had to do with a better looking clone named Mordor), I thought that the two episodes were pitch perfect.

Besides for the gorgeousness of Jaberwocky's bio-luminescent roof garden (and its fire squirrel), the episodes featured Ted and Veronica giving one of the most hilarious presentations ever created (complete with flash pots) and introduced a new love interest for Ted in the form of Rachelle Lefevre's Rebecca.

I've been a fan of Lefevre's since I first saw her way back when in Canadian feature film Hatley High and I thought she made a nice foil for Ted (Jay Harrington) here. Unlike the slighlty manic Linda (Andrea Anders), veterinarian Rebecca offered Ted a quirky but less high-strung lover, even if it's clear that he's meant to be with Linda in the end. There was some nice chemistry between Lefevre and Harrington that I hope carries into the second season but, as we all know from her recent scheduling conflict-related dismissal from Twilight: Eclipse, Lefevre is a very busy actress. Fingers crossed that she returns.

Linda, of course, realized that she did love Ted and broke up with her boyfriend rather than move in him... just in time to learn that Ted wanted to continue seeing Rebecca. Ouch.

Meanwhile, I loved that we learned--via Veridian's new privacy-busting facial-recognition search engine--that Veronica (Portia de Rossi) is a weekend magician's assistant for the bare-chested magician Mordor (The Ex List's Mark Deklin), whom she has fallen head over heels in love. Yes, the storyline would have been all the more funny if Will Arnett's GOB Bluth hadn't have already pulled it off so magnificently on Arrested Development... or if Arnett had reprised his role as GOB on Better Off Ted, which is after all produced by 20th Century Fox Television, the same studio behind Arrested Development.

Still, I enjoyed the hell out of these two episodes between the secret roof garden, the efforts by Lem (Malcolm Barrett) and Phil (Jonathan Slavin) to be more aggressive, the inside joke of Slavin playing a character named Byron (which he did on Fresco's Andy Richter Controls the Universe), the location of the blindfolded dove, the Pendragons-style metamorphosis of Mordor and Veronica, the maniacal squeals of glee from Dr. Bamba (Maz Jobrani), and, well, every second of last night's one-two punch.

All in all, Better Off Ted has proven itself a delightfully offbeat comedy that's already a must-see series in my household. The wait for new installments in November just got a hell of a lot more difficult. Now where did that fire squirrel get to?

Better Off Ted returns for its second season in November.

Danielle C.F. Maris said…
It was great seeing Veronica let her hair down (literally and figuratively). The magic show was hilarious, as was Veronica and Ted's presentation on, well, nothing.

Greer said…
I don't know which was scarier - the plove (plate/stove) or the fire squirrel. They must have so much fun coming up with these things!
8/12/2009

Mimi C said…
At first I was sad that ABC kept Ted but not The Unusuals. These episodes made me change my mind.

Ally said…
Two great episodes. So glad this show is coming back. I thought of the Pendragons, too. That is their trick! Good thing no one was shot. Oh snap!

Savvy Veterean said…
I'm going to miss it too. It's such an absurd, offbeat show (but somehow in a methodical way), is always hilarious, and is unlike any other comedy currently on TV. I'm so glad that ABC renewed it. Just wait until Lem's mom hears about this!

P.S. Because I love ARCTU, and I associate Slavin so much with that character, I, not thinking too hard about it obviously, thought that the joke throughout was that Phil (who my absentminded subconscious was thinking was named Byron) and the confident Byron from the photos had the same name. Didn't even realize my mistake until reading the review. Huh!
8/15/2009

Unknown said…
Excellent episodes. I only wish they'd decide whether they wanted to be PG or PG-13.

From what I've seen, comedies start going downhill when they advance romantic entanglements between protagonists. (Friends and The Office are good examples.) I hope the writers avoid that deathtrap by keeping Ted and Linda apart.
8/17/2009