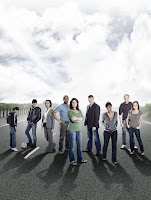 The much-delayed Survivors, which is an adaptation of the cult classic 1970s series (itself based on Terry Nation's novel), will have its US premiere on Saturday, February 13th at 8 pm ET/PT, before shifting to its regular timeslot at 9 pm ET/PT the following week.

The series tracks the adventures of a group of people who survive a global viral holocaust that wipes out 99 percent of the human race's population and who struggle to stay alive in the face of unspeakable odds following this global catastrophe.

In the official scheduling announcement, BBC America refers to the "twelve-episode season" of Survivors, which is a sign that the digital cabler intend to air the first two UK seasons of Survivors back-to-back. Season One, which aired in the UK in 2008, was comprised of six episodes and the second season of Survivors will launch early next year in the United Kingdom.

"Survivors is about what it means to be human, said Hodges. "It asks questions about our nature and confronts us with our deepest fears. When everything else is stripped away, would we band together and find the best in ourselves, or would we fall apart and retreat into barbarism and savagery?"

The full press release from BBC America announcing the scheduling can be found below.

ONE VIRUS. MILLIONS DEAD. ALL THAT’S LEFT IS HOPE.

Imagine what would happen if a virulent disease scoured the planet, wiping out 99% of the human race. It kills every member of your family, your lovers, friends, neighbors and probably everyone you have ever known. Imagine the world stripped of all the conveniences of the 21st Century – no law, no shops, no communications, no transport, no electricity, no clean water. This is the apocalyptic scenario facing the heroes at the center of this chilling new drama series, brought to you by the co-creator and writer of Primeval. Set in the present day, Survivors focuses on the world in the aftermath of a virus where only a lonely few are left to start over in a devastated world where everything that was once safe and familiar is now strange and dangerous. The 12 episode season of Survivors premieres Saturday, February 13, 8:00p.m. ET/PT - subsequent episodes premiere at 9:00p.m. ET/PT.

In the middle of the story is a bewildered but resilient group of survivors led by Abby Grant, a woman whose strength comes from a burning need to find out if her young son is still alive. Other members of the group include Greg (a good man who hides the pain of his past), Anya (a doctor who has seen too many people die) and Al, a former playboy who becomes surrogate father to streetwise urchin Najid. Then there is Tom, outwardly handsome and charming, but actually a dangerous and ruthless man who, unbeknown to the others, was a high-security prisoner before the virus hit.

This brave new world brings an opportunity for new beginnings, but also terrible dangers – not just the daily struggle for food and water, but also a deadly threat from other survivors. The cast includes Julie Graham as Abby Grant, Paterson Joseph as Greg, Freema Agyeman as Jenny, Max Beesley as Tom Price, Phillip Rhys as Al, Zoë Tapper as Anya, Nikki Amuka–Bird as Samantha Willis, Shaun Dingwall as David and newcomer Chahak Patel as 11-year-old Najid.

“Survivors is about what it means to be human,” says award-winning writer and executive producer Adrian Hodges (co-creator and writer of Primeval). “It asks questions about our nature and confronts us with our deepest fears. When everything else is stripped away, would we band together and find the best in ourselves, or would we fall apart and retreat into barbarism and savagery?”

Hodges’ Survivors is a re-imagining of the classic ‘70s BBC drama series, and is based on the novel by Terry Nation. Hodges adds: “Survivors is about adventure, fear, love, loyalty and friendship. But above all, it’s about new hope.”