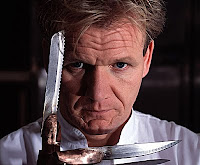 Gordon Ramsay isn't always the blustery, cuss-prone figure that he cuts on such programs as Hell's Kitchen.

In fact, on series like The F Word and Ramsay's Kitchen Nightmares, both of which air on BBC America, Ramsay allows his softer side to come through: calm, supportive, and empathetic. He offers a particular brand of tough love on his less showman-esque series that doesn't really come through amid the stageyness of FOX's Hell's Kitchen.

Which isn't to say that he doesn't scream to the high heavens. Because he does, especially when he can't get through the thick skull of one of the struggling restaurateurs he's attempting to save from financial ruin, as on Ramsay's Kitchen Nightmares, which returns to BBC America beginning tonight with two new episodes.

Despite offering a significantly shorter season than the previous entries in Ramsay's Kitchen Nightmares (the two episodes were originally transmitted as Great British Nightmare when it aired in the UK earlier this year), Ramsay and the producers pack a hell of a lot of punch into these two episodes.

Tonight's episode "Runaway Girl" might just be my favorite episode of the series, full stop, due to the fact that the owner of the struggling Sheffield tapas restaurant is so mindboggingly clueless. But it's not all tantrums and tears. The owner's poor best mate Ritchie, lured in two years earlier to be the head chef and then reduced to reheating buckets of food (quite literally), snaps once Gordon arrives. He's been so unappreciated, suffered such a loss of passion, that Ramsay's appearance not only reawakens his culinary passion but also touches him in a way that no one--not the audience or Ritchie himself--might expect.

Likewise, next week's episode ("Mick's Bisto") presents another major hurdle for Ramsay as he has to contend with a struggling family-run bistro in Devon... and the misogynistic, verbally abusive, and outright delusional pater familias Mick, whose treatment of his wife and adopted daughter is as staggering as his lack of culinary skills. Hint: his duck a l'orange features orange squash and his lamb comes from an unrefrigerated vacuum-sealed plastic bag that's filled with chemicals and astonishingly pre-made, despite his restaurants alleged ethos of fresh food from scratch.

Both episodes are the television equivalents of a trainwreck; it's impossible to look away even though you might be gagging to. Yet, even as you have to pick up your jaw off the floor, there's the hope that Gordon Ramsay will somehow use his superhuman culinary skills and business acumen to turn around these flailing businesses and pull them back into solvency. Just how he manages to do so--with clever marketing, simplified menus, and, yes, even some screaming--is what makes Ramsay's Kitchen Nightmares so absolutely addictive.

C Ronk said…
I cannot stand Hell's Kitchen. Nothing drives me out of a room faster than having that show on the TV.

Kitchen Nightmare's it only slightly better.

Having managed a restaurant in the past helps make this a little more entertaining.

Bella Spruce said…
Oh, only two episodes! Sad! I love Kitchen Nightmares and The F Word which definitely showcase Gordon's sunnier side. You would never know if from Hell's Kitchen but he really can be an incredible mentor and person!
12/02/2009