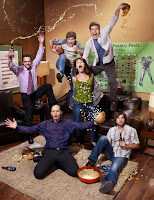 Has FX finally found its companion for It's Always Sunny in Philadelphia? All signs point to yes.

FX has renewed freshman comedy The League for a second season, picking up the series for an expanded order of thirteen episodes. The announcement comes as The League wraps its first season tomorrow night.

Season Two of The League, which is produced by FX Productions, is expected to launch in late summer 2010. (That's also when Season Six of It's Always Sunny in Philadelphia is also due to return. Hmmm...)

"We’ve been very pleased with the creative and ratings trajectory of The League and believe it’s an excellent fit with our comedy brand,” said Nick Grad, Executive Vice President of Original Programming, FX Networks, in a statement. “Jackie and Jeff Schaffer are incredibly talented producers and the ensemble cast is fantastic. The performance of the show this season is reminiscent of Sunny in its first season.”

The full press release from FX can be found below.

LOS ANGELES, December 9, 2009 – FX’s freshman comedy The League has been picked up for a second season with an expanded order of 13 episodes from FX Productions, announced Nick Grad, Executive Vice President of Original Programming, FX Networks.

Season two is scheduled to return in late summer of 2010. The first season finale of The League airs tomorrow (Thursday, Dec. 10) at 10:30 PM ET/PT, immediately following the season five finale of It’s Always Sunny in Philadelphia at 10:00 PM.

“We’ve been very pleased with the creative and ratings trajectory of The League and believe it’s an excellent fit with our comedy brand,” said Grad. “Jackie and Jeff Schaffer are incredibly talented producers and the ensemble cast is fantastic. The performance of the show this season is reminiscent of Sunny in its first season.”

Set against the backdrop of a fantasy football league, The League is about friendship, marriage, parenting, and growing up…or refusing to grow up. It was created by the husband-and-wife team of Jeff Schaffer (Curb Your Enthusiasm, Seinfeld) and Jackie Marcus Schaffer (Disturbia, EuroTrip) who serve as executive producers. The ensemble features Mark Duplass, Stephen Rannazzisi, Nick Kroll, Paul Scheer, Katie Aselton and Jon Lajoie. The series is produced by FX Productions.

“This has been a wonderful experience for me and Jeff,” said Jackie Marcus Schaffer. “Our cast – Mark, Steve, Nick, Paul, Katie and Jon – is made up of some of the most talented young actor-comedians in the business. So much of the credit goes to them.”

Jeff Schaffer added, "FX has been like the coolest girlfriend you could ever have. They get us, laugh at our jokes, and love hearing us talk about football. It's a perfect relationship - and we look forward to going steady with them for a long time."

In tomorrow’s season finale of The League (10:30 PM), “The Shiva Bowl,” perennial league champion Pete (Duplass) battles it out with perennial loser Andre (Paul Scheer) in the fantasy league title game. The guys try to hide the Shiva Trophy from their high school classmate - the actual Shiva. Taco (Jon Lajoie) finally gets a "real person job." The episode was written by Jeff Schaffer & Jackie Marcus Schaffer and directed by Jeff Schaffer.

Leading into The League finale tomorrow at 10:00 PM is the fifth season finale of It’s Always Sunny in Philadelphia. In “The Gang Reignites The Rivalry,” the Paddy’s team is once again eligible to compete in Flipadelphia – a city wide flip cup tournament – following their ten-year ban. Now all they have to do is instigate their old rivals, who have since grown up, to enter to competition. The episode was written by Dave Chernin & Charlie Day and directed by Randall Einhorn.

FX is raising the stakes in comedy. In addition It’s Always Sunny in Philadelphia and The League, the network will debut the new animated series Archer on Thursday, January 14 at 10:00 PM ET/PT, and Louie, starring stand-up comedian/actor Louis C.K. in the spring. FX has ordered ten episodes of Archer and 13 of Louie. FX previously ordered seasons six and seven of It’s Always Sunny in Philadelphia, with season six scheduled to launch next summer.

FX is the flagship general entertainment basic cable network from the Fox Networks Group. Launched in June of 1994, FX is carried in more than 96 million homes. The diverse schedule includes a growing roster of critically acclaimed and award-winning original series; an established film library with box-office hits from 20th Century Fox and other studios; and an impressive roster of acquired hit series. For more information about FX, visit our web site at www.FXnetworks.com.