TV on DVD: "It's Always Sunny in Philadelphia: A Very Sunny Christmas" 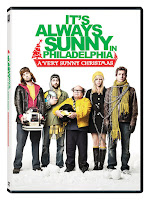 Looking to do a spit-take with your eggnog this holiday season?

FX's raucous and hysterical series It's Always Sunny in Philadelphia continues to push the envelope in terms of good taste (and always manages to make this jaded critic roar with laughter in the process) via its new direct-to-DVD Christmas special ("A Very Sunny Christmas") that captures the absurd energy of the television series and then some.

Without the cable network censors (lax, though they are) to hold them back, the creators/stars of Sunny push their unique brand of comedy even further with this outrageous Christmas special, which finds the gang attempting to get even with Frank for his tradition of giving himself the gifts that Dennis and Dee want each year and taking a stroll down memory lane as Mac and Charlie come to terms with some unpleasant truths about their own families', er, Christmas traditions.

While I found the Christmas special utterly hilarious, it's definitely not for everyone. The gang at Paddy's Pub isn't exactly known for their holiday cheer, which makes the holiday special all the more, well, special as they continue to engage in their egocentric and mind-shatteringly selfish antics with the offputting glee of a demented Santa's helper.

The faint of heart might want to look away when a naked Danny DeVito is birthed through a leather couch (seriously, I'm not kidding) and those who have a particular obsessive fondness for classic claymation Christmas specials like Rudolph and Frosty the Snowman might end up running out of the room in tears when the Sunny guys dramatically subvert the form.

Standout sequences in the Christmas special include the aforementioned couch-birthing scene (I can't do it justice by describing it), the claymation massacre (oh, yes, really), and anything involving Young Charlie and Young Mac, seen in flashbacks here. The single-disc release also features deleted scenes, a behind-the-scenes featurette, and the It's Always Sunny Sing-A-Long.

Yes, It's Always Sunny in Philadelphia's "A Very Sunny Christmas" has it all: carols, vintage robots, revenge, and elf genitalia. Get yourself a copy today and prepare to slip into an alternate universe... as you pick up your jaw from the floor.

It's Always Sunny in Philadelphia: A Very Sunny Christmas is available for purchase for a suggested retail price of $26.98.