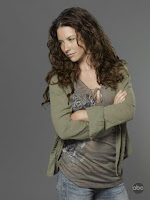 The Chicago Tribune's Maureen Ryan has some teasers from an interview she did with Lost showrunners Damon Lindelof and Carlton Cuse, which she'll publish in a few weeks. But as the anticipation for the sixth and final season of Lost (launching February 2nd), Ryan has graciously published some snippets from the interview now. "We kind of concocted the mythology of the show a long time ago, and it’s like having a Christmas present and you kept it on the shelf a long time and people are finally going to get to open it and see it," Cuse told Ryan about the series' ending. "So we’re finally getting to deploy the ending of the show and that is exciting to us. It is a story and I think as storytellers, that’s always what’s delicious -- you set up the audience and then you basically finish the story. There’s a payoff and we’re actually going to finally give the audience our payoff." (Chicago Tribune's The Watcher)

Entertainment Weekly's Michael Ausiello is reporting that Natasha Alam (The Bold and the Beautiful) has joined the cast of True Blood, where she will potentially recur as Fangtasia dancer Yvetta, with whom Eric (Alexander Skarsgård) "engages in a sexual relationship." And Gregg Daniel (Desperate Housewives) will play Reverend Daniels, to whom Tara's mother Lettie Mae (Adina Porter) turns for "comfort." (Entertainment Weekly's Michael Ausiello)

MAJOR DAD ALERT! Gerald McRaney (Jericho) has been cast in J.J. Abrams' NBC espionage drama pilot Undercovers, where he will play a CIA operative who recruited married spies Samantha and Steven Bloom to the agency and who serves as the company's liaison with the two spies. (Hollywood Reporter)

Jenny Wade (Reaper) has been cast opposite Colin Hanks and Bradley Whitford in FOX's new drama series Jack and Dan, which has already received an order for thirteen episodes. Wade will play Liz, described as "a tough and quick-witted assistant district attorney who used to date Jack (Hanks) and is now in frequent work-related contact with him." (Hollywood Reporter)

SPOILER! Looking for some Southland scoop? When Season Two of the cop drama kicks off on TNT sometime in March, the events of the season finale will be dealt with straightaway. But rest assured, Russell (Tom Everett Scott) does survive the shooting. "What happens to him is pretty devastating," Southland creator Ann Biderman told TVGuide.com. "His role changes in a way that's surprising. Lydia will face the challenge of what it's like to work without him. It's a big part of the next episodes." (TVGuide.com)

Show Money, the production company of producer Thomas Schlamme (The West Wing), has several projects set up in development at various networks, including: a US adaptation of Channel 4 comedy The Book Group at NBC with creator Annie Griffin adapting and Sony Pictures Television attached; Showtime drama Westbridge, about execution chamber workers at a Texas prison from writer Kelly Marcel; A&E police drama Back-Up, about a Jewish brother and sister who are both cops in Chicago and must deal with corruption charges against their father, from writer Robert Munic; single-camera comedy Boyfred at ABC, with Sony Pictures Television attached; the untitled Matthew Perry comedy vehicle at ABC about a sports arena manager (Perry) who finds himself in a mid-life crisis (also with Sony); and Paul Scheuring's futuristic revolution drama AR2 at FX. (Variety)

Jack Black and a mystery actor ("best known for his comedy hits at the box office") will be making a guest appearance on NBC's Community sometime in January, according to Zap2It's Korbi Ghosh. (Zap2It)

The CW's midseason drama Life UneXpected has been renamed yet again, this time to the less confusing Life Unexpected (no capital X). Series premieres on January 18th. (Variety)

Elsewhere at the netlet, Gaye Hirsch has been named SVP, drama development for the CW. She will report to Thom Sherman and oversee development of new drama properties for the netlet; she previously oversaw current programming. (Hollywood Reporter)

Jo Allen said…
Aaaah! All this talk about True Blood is just making me miss it even more! Looks like they're lining up an amazing cast for next season. I can't wait!
12/16/2009