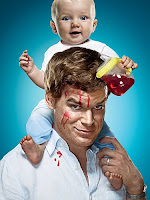 Just a day after the record-breaking season finale of Showtime's Dexter, executive producer/showrunner Clyde Phillips announced yesterday that he is leaving the series. He'll be replaced at the helm by Chip Johannessen (24). According to the Hollywood Reporter, Phillips made the "hugely difficult decision" to leave in order "to spend more time with his family in Connecticut." "Clyde Phillips has made an enormous contribution to the phenomenal success of Dexter for the past four years, but we know he needs to spend more time with his family on the East Coast than he spends with the Dexter family in L.A.," said Showtime entertainment president Robert Greenblatt. "We reluctantly say good-bye to him at a turning point in the series, but fellow Dexter executive producers Sara Colleton and John Goldwyn have chosen a great successor -- Chip Johannessen, who has been a key producer of '24' for the past two years. We're confident that he will bring intelligence, emotion and great storytelling to the next chapter of Dexter." (Hollywood Reporter)

SPOILER! Finally, James Frain (The Tudors) has been cast in True Blood, where he will recur next season as Franklin Mott, according to Entertainment Weekly's Michael Ausiello. Franklin is described as "tall, dark, and handsome vampire who seems to have an 'immediate and torrid' connection to Tara." (Entertainment Weekly's Ausiello Files)

Julian Fellowes (Gosford Park) has signed on to write the pilot script for Showtime's period drama The Vanderbilts, which will follow the saga of the wealthy railroad and shipping family. [Editor: I'm hugely familiar with the story of the Vanderbilts, so rest assured, there's plenty of drama for Fellowes to mine.] Project, from CBS Television Studios and Simon West Productions, is executive produced by Bob Balaban and Rob Paris. Project shouldn't be confused with Joel Silver's HBO Vanderbilts project, which is in development at the rival pay cabler. (Variety)

While the full schedule has yet to be announced, The 2010 William S. Paley Television Festival will include sessions on FOX's Glee and CW's Vampire Diaries. Plus, the festival this year will move from the Cinerama Dome at the Arclight to the Saban Theatre in Beverly Hills, which will accommodate approximately 1000 more seats. The festival is slated to run between February 26th and March 14th. (Variety)

TVGuide.com's Mickey O'Connor talks to Scrubs executive producer Bill Lawrence about the series, which underwent a huge overhaul and cast change when it relaunched earlier this month. "I've been doing this a long time and we knew there's no possible way to please everyone," Lawrence told O'Connor. "Look, if I had done a brand-new show, you would read 9,000 things about how the new characters all suck. Even though when Scrubs premiered eight years ago, I read 9,000 things in the first two episodes about how these characters suck. With new characters, it takes three, four, five, six episodes to figure out who they are. And then the other hand, we got these people to make transitions to people hopefully you'll still like. You'll also read stuff, "why can't it just be about Zach, where's Carla and the Janitor" and I'm, like, well, that show's over." (TVGuide.com)

Callie Khouri (Thelma and Louise) and Angelina Burnett will write the pilot script for FOX legal dramedy The Real Amanda Strauss, about a woman who works in the district attorney’s office and secretly comes from a family of con artists. Project, from Sony Pictures Television and Furst Films, will be executive produced by Sean and Bryan Furst, along with Burnett and Kouri, who may direct should the project get ordered to pilot. (Variety)

Entertainment Weekly's Michael Ausiello is reporting that Modern Family's Jesse Tyler Ferguson will reprise his role as Betty's orthodontist Dr. Farkus on ABC's Ugly Betty later this season. Ferguson will appear in the January 6th episode of Ugly Betty but whether he'll be removing Betty's braces is another question. It’s a really fun scene between the two of them," executive producer Silvio Horta told Ausiello. (Entertainment Weekly's Ausiello Files)

VH1 has ordered eight one-hour episodes of a Tough Love spinoff entitled Tough Love: Couples, in which Steve Ward and his mother JoAnn will "take five couples on the verge of becoming engaged and puts their relationships to the test." Series will launch in second quarter 2010. (Hollywood Reporter)

Bella Spruce said…
I'm excited about the Julian Fellowes/Showtime project. Fellowes is an accomplished writer and I'm excited to see what he does with the Vanderbilt story!
12/15/2009

Viv said…
I liked having the Paley TV Fest at the Arclight Dome (seeing the final Pushing Daisies there was amazing!) but I'm glad they are at least moving to a venue with more seats as tickets are always hard to come by!
12/15/2009