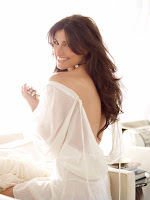 Former Wicked star Idina Menzel is in advanced talks to join the cast of FOX's Glee in a recurring role when the series returns in March with its back nine episodes. Menzel, who will play the coach for the glee club's main rivals, Vocal Adrenaline, could potentially appear in all nine remaining installments this season. [Editor: personally, given the strong resemblance between Menzel and Lea Michele, I figured producers would get her to play Rachel's biological mother. Unless...] Menzel will also be joined by Spring Awakening's Jonathan Groff who, as previously reported, joins Glee in a multiple-episode story arc and is slated to appear in five or six episodes this spring. (Hollywood Reporter, Entertainment Weekly's Ausiello Files)

Meanwhile, E! Online's Megan Masters has some details about what we should expect from Glee's back nine episodes. "I don't know if Glee starts back after a school break, but it's basketball now," Corey Monteith tells Masters. "Finn Hudson is the captain of the basketball team." And look for more music, according to Kevin McHale. "There are more songs per episode than the first 13, so it's more work, but it's fun. It's all different genres, the most eclectic so far.... There are classic songs that I never thought we'd be able to do by big, famous bands—oldie, classics, very well-known bands that we're going to Gleeify." (E! Online's Watch with Kristin)

TVGuide.com's Natalie Abrams gets ten fantastic questions with Chuck star Zachary Levi about Season Three of the NBC action-comedy, which (finally!) returns to the schedule on January 10th. "We found out late about the six episode pickup, so the writers had already molded and created the 13-episode arc," said Levi when asked about the late-in-the-game six-episode additional order. "We couldn't try to fit six episodes into that without screwing everything up, so now it's six episodes that stand on their own in a lot of ways. They'll still be coming off of and informed by these 13 episodes, but it won't be a part of the bigger arc. I know that it will be its own mini arc... This season we've gotten to do some international travel with the show, taking it out of the domestic United States of America; that's been fun. I think maybe we'll try and do more of that. I know that everyone will continue to progress with the characters and the relationships." (TVGuide.com)

ABC has ordered reality dating series Conveyor Belt of Love, in which 30 single men are given a minute in front of 5 women and then rolled long on a conveyor belt, and will debut the format as a special on January 4th, following the season premiere of The Bachelor (full title: The Bachelor: On the Wings of Love). Series, from Endemol and executive producers Tom Shelly and Alex Duda, might represent a new low in the already sensationalized dating genre. (Hollywood Reporter)

Hugh Laurie will direct an upcoming episode of FOX's House, which will air this spring. "I am thrilled, daunted and honoured – with a ‘u’ – by this new responsibility," said Laurie in a statement. "House scripts are Fabergé eggs, and I will try my very hardest not to drop this one on a stone floor." According to executive producer Katie Jacobs, the episode Laurie is directing is "very intense and truly a director’s piece." (via press release)

ABC has given the 8 pm Thursdays timeslot (formerly home to FlashForward) to 20th Century Fox Television's six-episode legal dramedy The Deep End. It's expected to premiere in January, with some speculating that the series will debut on January 14th (that night will feature a crossover between Grey's Anatomy and Private Practice), while others contend that it will launch the following week, on January 21st. ABC has yet to indicate scheduling for its other midseason drama entry, Happy Town. (The Wrap's TVMoJoe, Variety)

Pilot casting alert! Alfre Woodard (Three Rivers) has been cast opposite Jason Lee in TNT drama pilot Delta Blues, where she will play a "formidable new lieutenant who tries to exercise her power over Dwight (Lee)" in the George Clooney and Grant Heslov-executive produced pilot. (Hollywood Reporter)

Additionally, Kate Micucci (Scrubs) has been cast in Greg Garcia's FOX comedy pilot Keep Hope Alive, where she will play a character described as "an unkempt, fairly oblivious cousin of Jimmy (Lucas Neff) living in a tent in the laundry room of their great-grandmother's house." The role was originally written for a male actor and named Mike. Project, from 20th Century Fox Television, is about a single dad who must raise his infant daughter with the help of his family after the baby's mother, with whom he had a one-night stand, winds up on death row. (Hollywood Reporter)

FX has ordered a second season of The League, with thirteen episodes set to air beginning in late summer 2010. (Televisionary)

ABC has given a pilot presentation order to The Six, a US adaptation of long-running Russian game show What? Where? When? from Merv Griffin Entertainment. (Hollywood Reporter)

FOX has given a script order for an untitled multicamera workplace comedy spec script from writer/executive producer Matt Goldman (Seinfeld). Project, from Sony Pictures Television and Tannenbaum Company, follows a man "who tries to make a comeback, both personally and professionally, while working at a dysfunctional company for a woman he dumped five years ago." (Hollywood Reporter)

Oprah Winfrey's nascent cable channel OWN has signed a deal with independent documentary distributor Roco Productions for a monthly documentary showcase on the cabler and possible theatrical releases. (Variety)

ITV executive Natalka Znak, who co-created and executive produced such UK reality hits as Hell's Kitchen and I'm a Celebrity, Get Me Out of Here! has been hired by RDF USA as executive vice president. She will assume her new role beginning in April. (Hollywood Reporter)

Discovery Channel SVP Gena McCarthy has left the network. While no reason was given as to why McCarthy stepped down from her position, reports indicate that it might be related to structural reorganization at the cabler. (Variety)

Are you going to be releasing any other info or interviews from your past Chuck set visit? The Yvonne interview was fantastic and I was hoping you had more.

rockauteur said…
Well TNT just gave me a reason NOT to watch the new Jason Lee show DELTA BLUES: Alfre Woodward. Her name says it all: she's a wooden actress, and annoying to watch. She single handedly ruined Desperate Housewives season 2, and I cringe anytime she appears in a movie or tv show. It's the main reason I never tuned into THREE RIVERS!
12/10/2009